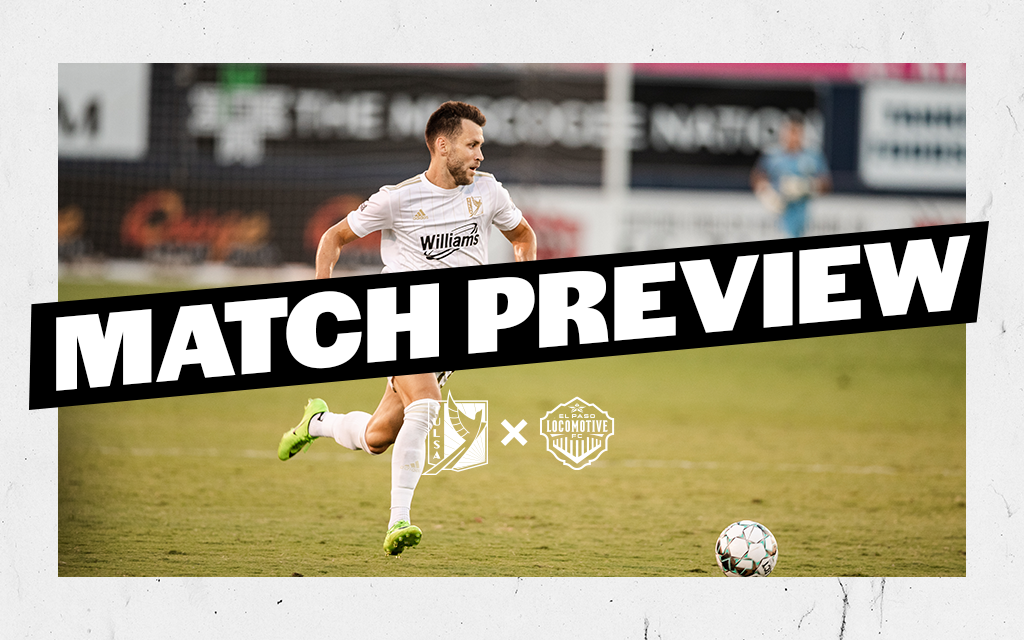 TULSA – The definition of a revenge game.

On Saturday night, FC Tulsa will host the club that knocked it out of the Playoffs just a season ago, a match that ultimately came down to penalty kicks – El Paso Locomotive FC. This time, FC Tulsa will aim to derail the onrushing force before the final whistle sounds.

FC Tulsa comes into this one needing to turn its fortunes around. The club has not won over its last four matches but has drawn twice, earning enough points to stay in third place in the Central Division standings ahead of Memphis 901 FC. Despite losing to Memphis in its last match, FC Tulsa did register a season-high 28 shots and keeper Austin Wormell made several spectacular stops late, tallying five saves in total.

Unfortunately for FC Tulsa, El Paso is not the easiest club to spark your offense against. Locomotive FC offers perhaps the USL Championship’s best defense, allowing an astounding 0.8 goals per match in 2021. It is a unit that is middle of the League in scoring goals but is masterful when it comes to preventing them.

Saturday night will also be Hispanic Heritage Night at ONEOK Field as part of Festival Americas, an all-day celebration of Hispanic culture packed with vendors, food, music, and fun. Come on out to Festival Americas during the day and finish off your Saturday night with FC Tulsa and a match-special $3 Modelo or two as well. Tickets for FC Tulsa vs El Paso Locomotive FC can be purchased here.

SCOUTING EL PASO LOCOMOTIVE FC
El Paso Locomotive FC is one of the best clubs the USL Championship has to offer. Currently leading the Mountain Division with 52 points, El Paso’s defense is the club’s bread and butter. It has only conceded 22 times through 26 matches and has recorded 11 clean sheets, both stats second only to the Tampa Bay Rowdies.

It is a well-disciplined unit with the fourth-fewest fouls and the highest passing accuracy pct. in the League this season at 85%. Locomotive FC also has only lost a staggering two matches this season – the next closest is, once again, Tampa Bay with six losses.

Diego Luna and Luis Solignac are both tied for the El Paso lead in goals with seven apiece. Solignac also leads the clubs with five assists while keeper Logan Ketterer leads EL Paso with 48 saves and a 71.6% save pct. to go along with seven clean sheets.

1) 2020 Encore
Saturday night’s contest between Tulsa and El Paso is a rematch of the 2020 Conference Quarter-finals Playoffs matchup that saw El Paso ultimately move on and bring FC Tulsa’s 2020 campaign to a close. After 90 minutes, the score was tied at 2-2, forcing PKs in which El Paso converted more opportunities than FC Tulsa, winning 4-2 in the shootout. Bradley Bourgeois and Christian Altamirano were the two players for FC Tulsa who converted their chances. Every postseason match El Paso would play in 2020 would go to a shootout and the club finally came up short losing 4-2 in PKs against the Western Conference champion Phoenix Rising FC.

2) Playoff Picture
The rising of Memphis 901 FC over the past month has begun to create some uncertainty in the Central Division standings. FC Tulsa still has a 97% chance of making the playoffs and Memphis’ odds have grown to 94% with OKC’s chances sliding to just 7% according to FiveThirtyEight. However, it will be a battle down the stretch for third place between Tulsa and Memphis. Whoever ends up in fourth will likely be on the road in Tampa Bay for the first round of the Playoffs to face arguably the best club in the League.

3) Hispanic Heritage Night
All day long at ONEOK Field and the surrounding area, Festival of the Americas will be taking place to celebrate Hispanic culture with vendors, live music and dancing, food trucks, and much more. As part of the festivities, FC Tulsa is hosting Hispanic Heritage night with special vendors, drink specials, and an Independencia La LIGA match after the firework show on the ONEOK pitch.