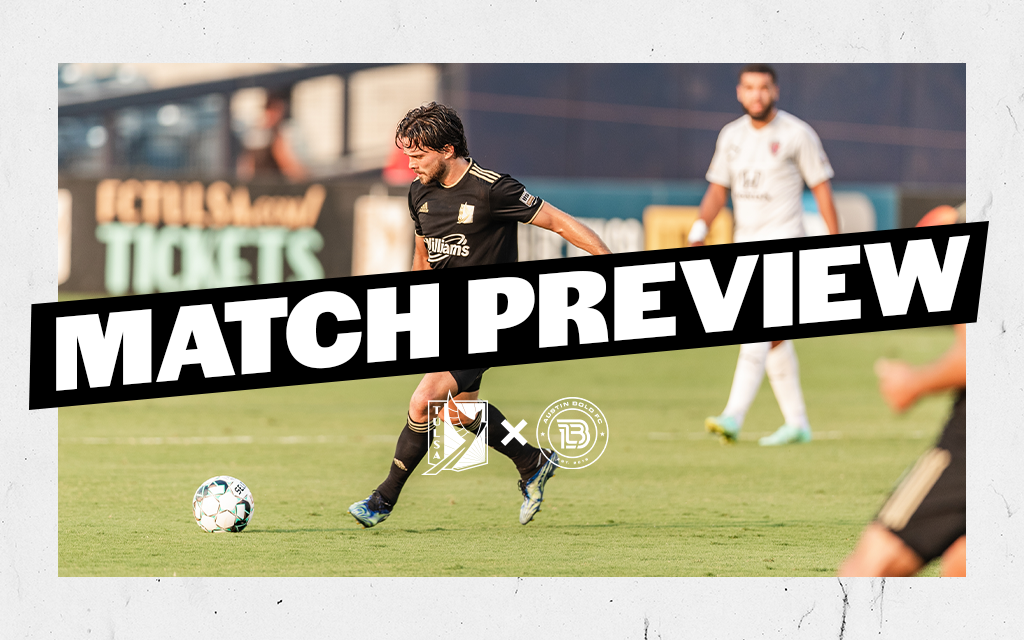 TULSA – After 14 straight matches against Central Division opposition, FC Tulsa goes outside the Central for its second of four out-of-division matches in 2021 when it hosts Austin Bold FC at ONEOK Field on Saturday. It’ll be a 918 Day celebration as the city of Tulsa descends on ONEOK to show civic pride on 9/18.

For FC Tulsa, it’s another chance to keep putting points on the board in the race for a USL Championship Playoffs spot, a feat that has now been accomplished in six straight matches. While a five-match winning streak was snapped last Saturday in the 1-1 draw against Birmingham Legion FC, the point earned kept FC Tulsa within two points of the all-important top two spots in the division.

Bold FC might not be a Central Division opponent, however the club is still a familiar one to FC Tulsa fans, as the sides met three times in 2020 and in the 2021 preseason. Oddly enough, Tulsa and Austin drew in all four of those matches and FC Tulsa has yet to find victory in seven overall matches against Bold FC (five regular season, one preseason and one U.S. Open Cup).

Saturday should present the best opportunity yet for Michael Nsien and company to pick up that elusive first win over Austin, backed by what should be a large home crowd, on an unbeaten streak and with a relatively healthy roster to work with.

Get your tickets to the 918 Day match here.

SCOUTING AUSTIN BOLD
It’s been a strange year for Austin Bold FC, to say the least. From having to welcome a new MLS franchise to town in Austin FC to a midseason coaching change and numerous player departures, Bold FC have faced plenty of adversity in 2021. Despite the challenges, Austin finds itself in USL Championship Playoffs position with only three losses in its last 14 matches including victories in each of its last two.

Those two wins have come in new head coach Ryan Thompson’s first two matches in charge after taking over for previous gaffer Marcelo Serrano. Bolstered by the new voice in the locker room, Austin has picked up home wins over San Antonio (2-1) and New Mexico United (1-0).

A match on the road will be a whole different story for Austin though, as the club has won just three road matches all season, including none of its last three. With 3-0 and 4-1 road losses in its last two matches outside of Hill Country, Austin will need to find its travel legs to earn a result in Tulsa.

1) 918 Day
FC Tulsa is throwing a big celebration for 918 Day for all fans to enjoy. Starting with $9.18 tickets to the match, there are deals all over the place at ONEOK Field. All FC Tulsa merchandise on Saturday will be marked down 9.18%, including merch at the Team Shop, Online Shop and at all ONEOK Field merch stands.

Fans will want to arrive to ONEOK Field early for a special 918 Happy Hour featuring $3 Modelo cans between 6-7 p.m. CT at the beer cart behind sections 107/108. During the Happy Hour, DJ Johnnie Bananas will be playing his tunes over the ONEOK speakers to get the party started.

Get your tickets here!

2) Analytics Update
A second consecutive Playoffs berth is now directly in FC Tulsa’s sights with the current six-match unbeaten streak, and Tulsa can lower its “Magic Number” by extending that streak to seven. Any points earned this weekend, or lost by Indy Eleven or OKC Energy FC, would inch that Magic Number from 19. When it hits 0, FC Tulsa will have clinched a Playoffs spot.

FiveThirtyEight currently has FC Tulsa at a 98% chance to reach the Playoffs with a 32% chance to finish in a top two position. The site also provides match-by-match odds, and FC Tulsa is favored this weekend at home, with a 69% chance of earning a result and a 41% chance of taking all three points.

3) Super Darío Against the Bold
No player has been more critical offensively for FC Tulsa over the last two seasons than forward Darío Suárez. The Cuban increased his goal total to eight this season by scoring each of FC Tulsa’s last two goals, both penalties. His 16 total goals scored is the most of any player in the FC Tulsa-era of the franchise, and he has had a knack in particular for scoring against Austin Bold FC.

In his three regular season matchups against Austin last season, Suárez scored in all of them, totaling four goals, half of his overall 2020 season tally. With four goals and an assist in his last six matches, Saturday’s match is coming at the perfect time for Super Darío and maybe at the worst for Austin Bold FC.