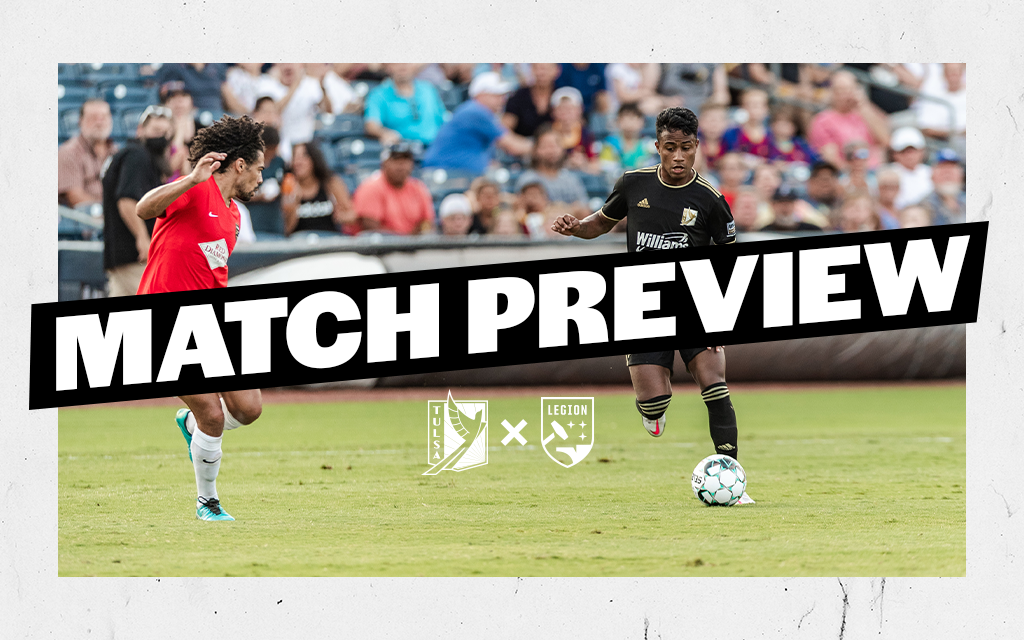 TULSA – The battle for second place is set at ONEOK Field.

FC Tulsa plays host to Birmingham Legion FC on Saturday night just two points behind Birmingham, a club FC Tulsa has defeated in each of its last two matchups. A home playoff game is awarded to the top two clubs in the Central Division, making the second spot so much more advantageous than the third spot come November, and FC Tulsa is ready to commandeer that position from Legion FC.

A six-match win streak is in the sights of FC Tulsa, a feat achieved only 12 times by clubs in USL Championship since the inception of the Tulsa Roughnecks in 2015. The streak has launched FC Tulsa into sixth in the Week 20 USL Championship Power Rankings, its highest ranking since Week 4 when the club ranked second in the rankings.

Over its five wins in its last five matches, FC Tulsa has scored first in every match and is 11W-1L-0W overall this season when netting the opening goal. On average, Birmingham Legion concedes 20 minutes before it scores on the road this season.

Marlon and Darío Suárez have scored six of the club’s nine goals over FC Tulsa’s five-match win streak and continue to drive the offense. Both wingers scored on Wednesday night against Indy and do not appear to be slowing down. Head coach Michael Nsien will also have Joaquín Rivas back in the squad coming off international duty with El Salvador to bolster an attack already firing on all cylinders.

Sean Lewis left the match late in the first half on Wednesday night with a lower-body injury and is questionable to appear against Birmingham, but FC Tulsa is in good hands with rookie Austin Wormell. In seven appearances this season, Wormell has made 20 saves and come up with a clean sheet as well.

Overall, FC Tulsa leads the season series 2-1 and has won the previous two matchups, outscoring Birmingham 5-2 in those matches. So far, this series has featured three goals from FC Tulsa beyond the 80’, a last-minute win, palpable tension on the field, and fireworks at ONEOK Field. Now throw second place in the Central Division into the mix, and you have a must-watch match on Saturday night.

Stick around after the match as the Tulsa Police Department and Tulsa Fire Department will face off in a soccer match for some friendly fun at ONEOK following the FC Tulsa match as part of First Responders Night.

FC Tulsa vs Birmingham Legion FC, presented by Tulsa Spine and Rehab, kicks off from ONEOK Field at 7:00 p.m. CT.

SCOUTING BIRMINGHAM LEGION FC
Birmingham Legion FC is a club that has built its success on the backs of its defense.  Although only scoring 30 times in 22 matches, Birmingham has held opponents to just 25 goals, resulting in 12W-7L-3D record. Birmingham has been less impressive on the road than at home, posting a 6W-4L-2D record away from home, but interestingly enough has registered four of its six clean sheets on the road this season.

Legion FC is coming off perhaps its toughest defeat of the season in which it gave up two stoppage-time goals to Memphis 901 FC, allowing FC Tulsa to move three points closer superseding it in the standings. However, Junior Flemmings will return to Birmingham Legion FC after being on international duty for Jamaica, bolstering its offensive presence on the wing.

Neco Brett leads Birmingham in scoring with 12 goals, tying him for third in USL Championship. Brett has scored three of Birmingham’s four goals against FC Tulsa this season. Jonathan Dean leads the club in assists with four and chances created with 34. Keeper Matt Van Oekel is one of the best USL Championship has to offer, posting 59 saves in 20 matches for a 72.8% save pct. Van Oekel has also come up with six clean sheets, second-best in the Eastern Conference.

1) Offensive Attack
FC Tulsa is now near the top of the USL Championship in both goals and conversion after the winning streak. The 36 total goals scored over 22 matches give FC Tulsa 1.64 scored per match, the 5th-best mark in the league. Since 2016, every USL Championship finalist has finished the season in the top 5 in scoring in the league, a good omen for FC Tulsa fans.

2) 97% Odds
The numbers are in FC Tulsa’s favor when it comes to a second-consecutive USL Championship Playoffs berth. According to the data and analytics site FiveThirtyEight, FC Tulsa has a 97% chance of making the USL Championship Playoffs with a projected point total of 51. Those odds are the eighth-best in the league right now. FiveThirtyEight still projects Tulsa to finish in 3rd in the Central Division with a 52% chance, however, a top two position could still be in the cards with a 37% chance of finishing 1st or 2nd.