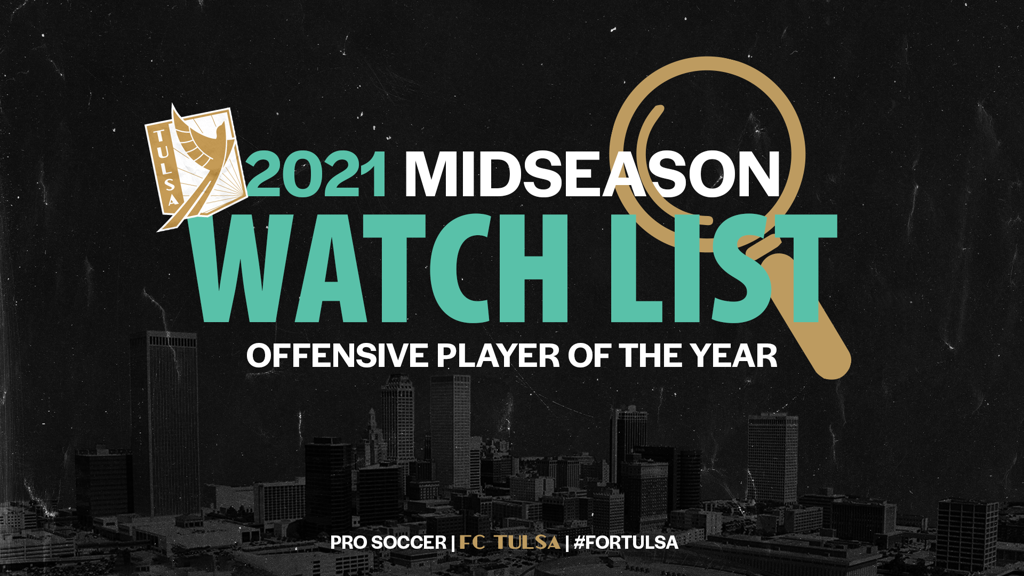 At the midway point in the 2021 USL Championship season, FC Tulsa sits in third place in the Central Division with a 7-8-1 record. While there have been some fun wins and tough losing streaks throughout the first half, FC Tulsa currently sits in Playoff position and still has everything left to play for in the second half of the year.

With that in mind, it’s Midseason Award Watch List time! Those of us at FCTulsa.com will see how the standout performers on FC Tulsa stack up for some hardware each day this week. We’ll back up our choices with all of the relevant statistics, but also want your opinions, so follow us on Twitter or download the Official FC Tulsa App on the App Store or Google Play Store to make your selections.

Let’s get started with our Midseason Offensive Player of the Year Award Watch List.

FRONT RUNNER – Rodrigo da Costa
Could it be anyone else? The Brazilian attacker has found his All-League form from 2019 with eight goals and four assists through 16 matches. Both totals rank in the top 10 in the USL Championship so far this season. Da Costa has started all 16 matches over the course of the season, has worn the armband in the stead of captain Bradley Bourgeois when necessary and had four matches already this season where he has been on the scoresheet twice.

The 27-year-old vice-captain is not just a goalscorer as he has created 31 chances so far in 2021, the most on FC Tulsa by a wide margin and the seventh-most in the league. If he maintains his pace, da Costa could surpass his 2019 season where he finished with nine goals and 13 assists and made the USL Championship’s All-League Second Team. Not only would an FC Tulsa end of the season award be in the cards, but some league hardware could be as well.

RUNNER UP – Darío Suárez
While Super Darío hasn’t been the scoring leader for FC Tulsa in 2021 like he was in 2020, the reigning FC Tulsa Offensive Player of the Year has been a significant offensive contributor, with four goals and two assists this season. He’s played in all 16 matches and has appeared in every single match of the FC Tulsa era, something that must be commended.

He hasn’t gotten on the scoresheet with a goal or assist in the last seven matches, but Suárez is streaky and can get hot in a heartbeat. Don’t be surprised if Super Darío goes on another tear in the second half of 2021 and makes a move for his second consecutive Offensive Player of the Year honor.

HONORABLE MENTION: Joaquín Rivas
Rivas has done it on the national and international stage throughout 2021. He started off the year strong, with four goals in his first three matches of the season but has added just one goal and one assist to his season tally since. Part of the reason for that is due to not being available. Rivas has missed six matches this year – five due to international duty and one because of injury. When factoring in that Rivas has played in just 10 USL Championship matches this season, the five goals and one assist stand out even more.

Rivas looks close to finding that early season form again however, as the forward has six shots, three chances created and one assist over his last two matches. If not for some excellent opposing goalkeeping, he might have added to his goal total last week as well.

DARK HORSE – Marlon Santos
Da Costa’s countryman might be setting up for a strong second half of the season following his late match winner on Saturday night against Birmingham Legion FC. That goal gave Marlon four goals on the season to go along with one assist. However, Marlon’s impact goes beyond the scoresheet.

Anyone who has watched an FC Tulsa match in 2021 has noticed Marlon on the right wing, routinely beating defenders through his speed and footwork on the ball. He ranks third on the team in tackles won, second in aerial duels won and first in overall duels won. One underrated stat is the amount of fouls Marlon wins. So far this season, the fiery Brazilian has drawn 31 fouls, the 11th most in the USL Championship. That’s 31 set pieces, many in the attacking half, that FC Tulsa has gained through Marlon’s aggressive play.

While he will get credit for the match winning goal, he should also be applauded for drawing the free kick that set off the sequence to his match winner.

Stay tuned for tomorrow's piece which examines the best defenders for FC Tulsa.