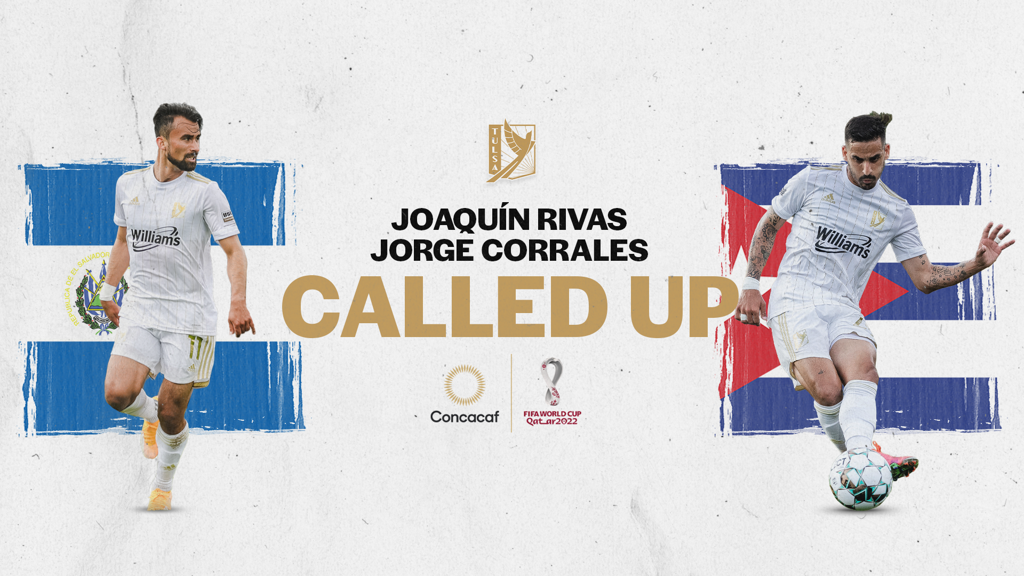 Rivas and Corrales will again appear in World Cup Qualifiers

TULSA – FC Tulsa’s domestic success continues to lead to international recognition for its players. Joaquín Rivas, who leads FC Tulsa with four goals so far this season, and Jorge Luis Corrales, who leads the club in assists with two, have received the call from their national teams for a pair of 2022 FIFA World Cup Qualifying matches in June.

“Jorge and Joaquín being called in to their respective national teams is a dream for any professional player,” said FC Tulsa head coach Michael Nsien. “It’s a testament to their ability, hard work, and dedication to their development over long periods of time. Players like Jorge and Joaquín help create a great environment for the team, and FC Tulsa supporters should be excited that we have this caliber of professionals in our club. The youth players in Tulsa should also look to model what they’re doing in their own journey as players after these dedicated professionals.”

This is Rivas’ eighth call up to the Salvadoran National Team in his international career, and his third since signing with FC Tulsa back in December. Rivas has made eight total appearances for La Selecta in World Cup Qualifiers, CONCACAF Nations League Qualifiers, and international friendlies in his career. He’s scored one goal and notched his first international assist during his last stint with El Salvador in March.

“This call up is an honor and a privilege,” said Rivas. “I’m thankful for every opportunity that I’ve been blessed with this year. I’m hoping to continue my success with El Salvador this window in these World Cup qualifiers and use any experience I gain to benefit FC Tulsa.”

Corrales receives his second call up since he made his return to Tulsa this offseason, and the 12th of his career. Corrales has appeared 36 times for the Cuban National Team, competing in World Cup Qualifiers, Caribbean Cup, Gold Cup, and international friendlies. Corrales was a fixture in the Cuban selection from 2011 until 2015, but once he moved to the United States in 2015 to pursue his professional career, he was unavailable for selection due to a rule which barred foreign-based players from competing for Cuba. That rule changed ahead of March’s qualifying matches, in which Corrales played every minute of Cuba’s first two qualifiers.

“It’s an honor and a big opportunity to represent my country again,” said Corrales. “It shows that Cuba have great quality players. I’m always happy to represent them and looking forward for more chances like this. I appreciate FC Tulsa for letting me be part of this moment.”

El Salvador is looking to qualify for its third ever World Cup, and Cuba is seeking its second berth. Both squads must finish at the top of their respective groups in order to make the eight-team qualification round, which will determine the nations that will compete in the 2022 World Cup from CONCACAF.

Below are match dates and info (Times in CT).