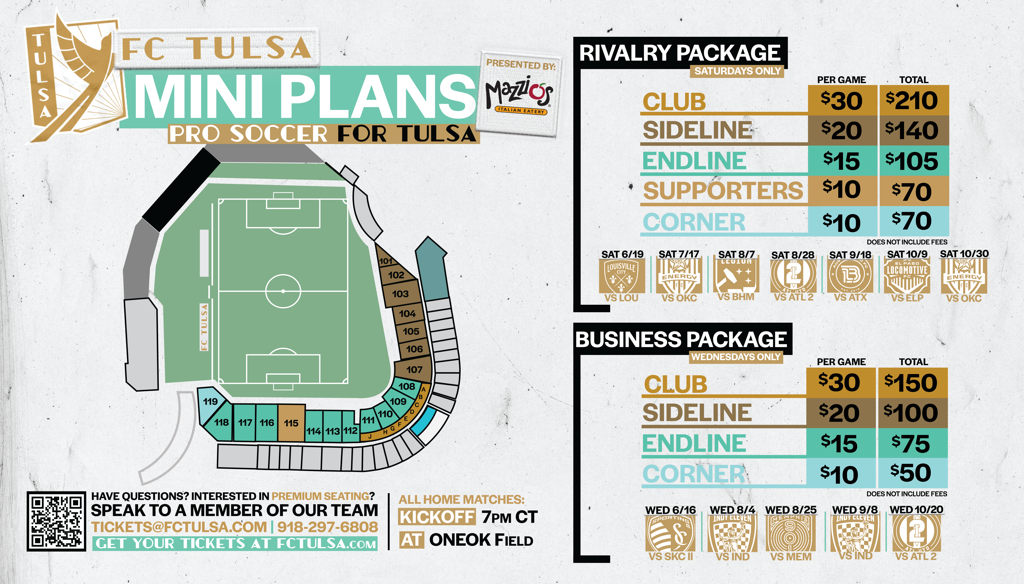 TULSA – FC Tulsa is launching two 2021 Mazzio’s Mini Plans to give fans more ticket options with great value throughout the ongoing season. A seven-match Saturdays-only “Rivalry Package” will accompany a five-match “Business Package” which will include all of the Wednesday night matches at ONEOK Field. Tickets for both Mini Plans come at a special rate and are available now, just in time for FC Tulsa’s next home matches at ONEOK Field coming on June 16 and June 19.

Meanwhile, those looking to enjoy a midweek getaway at ONEOK Field can purchase the “Business Package” which will include all five of FC Tulsa’s Wednesday night matches in 2021. Fans with the Business Package will get tickets to FC Tulsa’s next home match on June 16 against Sporting Kansas City II, the inaugural trips to Tulsa for Indy Eleven and Memphis 901 FC in August and the midweek finale against Atlanta United 2 on October 20.

All tickets in the Mazzio’s Mini Plans give fans great value, with each ticket being $10 cheaper than the Day of Game ticket price if purchased in the Rivalry Package or Business Package. Fans with a Mini Plan will also receive priority for any 2021 USL Championship Playoffs matches at ONEOK Field.

More details about the "Rivalry Package" and "Business Package" can be found online at FCTulsa.com/mini-plans or by calling FC Tulsa at (918) 297-6808.