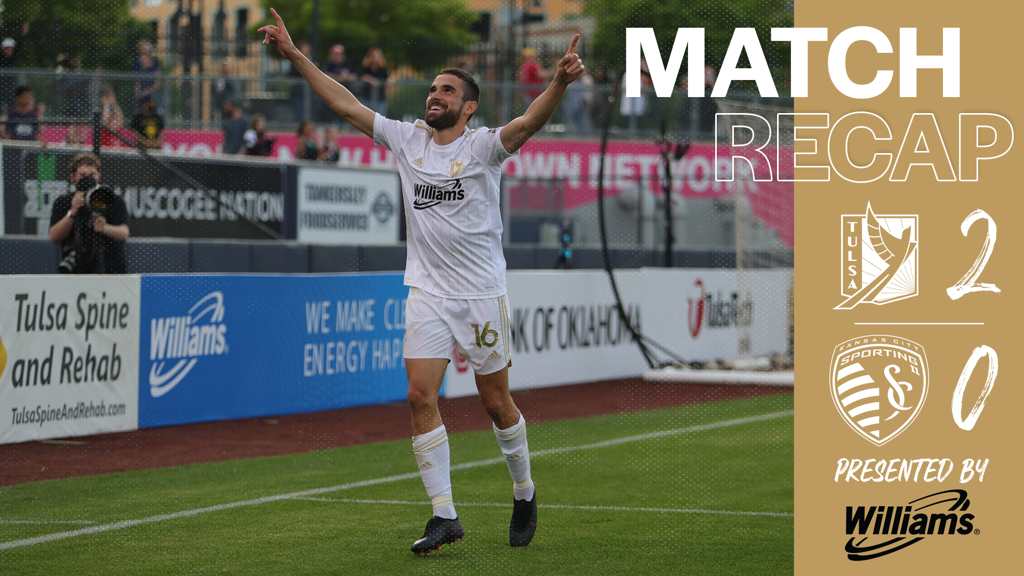 TULSA – One streak broken. Another extended.

The largest crowd at ONEOK Field in the FC Tulsa era witnessed some history each way on Saturday night as a capacity crowd of 4,241 saw FC Tulsa take down Sporting KC II 2-0. The win over SKCII not only extended the franchise-best USL Championship unbeaten streak to nine matches, but also broke Tulsa's nine-match winless streak in the series history against Sporting KC II.

Rodrigo da Costa was a deserved Man of the Match as the midfielder turned forward registered his first goal and first assist of 2021 to help FC Tulsa cruise in Greenwood. It was a comfortable victory for the home team who held Sporting KC II to just one shot on goal while the offense peppered the SKCII net.

Here are quick notes from the victory...

UNBEATEN STREAK TO NINE
FC Tulsa got sweet revenge for its last USL Championship regular season loss on August 29 against Sporting Kansas City II. Since that match, FC Tulsa has gone 6-0-3, including wins in each of its last five matches. The nine-match streak without a loss is the longest in franchise history.

DA COSTA FINDS FIRSTS
Rodrigo da Costa's opening goal and assist on Saturday night were each the first for the midfielder in 2021. Da Costa's tally was his 14th goal for Tulsa in his career dating back  2019 and his assist puts him at 16 all-time in that category, which leads the franchise.

ANOTHER ASSIST FOR CORRALES
Two matches, two assists for left back Jorge Corrales. He's one of only X players in the league with multiple assists already in 2021. Corrales' two assists in 2021 match his total he recorded in 31 appearances in 2017 for the club.

ATOP THE USL CHAMPIONSHIP
FC Tulsa is one of just three teams to have played two USL Championship matches, but is the only one with two wins in two matches. For the time being, FC Tulsa sits atop the league standings and despite the small sample size, it feels right to mention it. OKC Energy FC is the only team with two losses so far in 2021.

UP NEXT
FC Tulsa starts a four-match roadtrip next Saturday with an away day against Indy Eleven. Kickoff is at 6 p.m. CT.