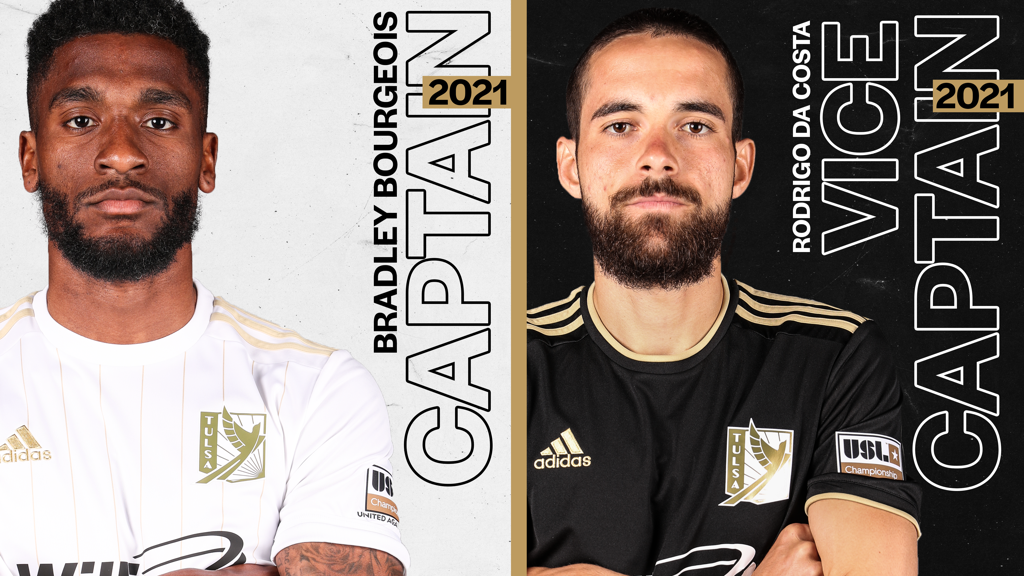 TULSA – Two of FC Tulsa’s longest serving players will form the backbone of its on-pitch leadership structure in 2021. The club announced on Thursday morning that defender Bradley Bourgeois would wear the armband in 2021 and serve as the FC Tulsa Captain this season, with midfielder Rodrigo da Costa leading alongside Bourgeois as the Vice Captain.

“Bradley and Rodrigo will be leading our squad into this 2021 season,” said head coach Michael Nsien. “Bradley was one of our Captains last season, and it was important to continue to build upon the high standards that were set for last year. Bradley embodies a professional mentality, and I know he will help shape this team for success with all of his ability. Rodrigo has worked with our staff since 2019 and has given everything for the club over the last two years. FC Tulsa is in great hands with these two at the helm in addition to other key leaders on our roster.”

Bourgeois has in many ways represented the face of the FC Tulsa era of the club that began with the 2020 season. A University of Tulsa grad, Bourgeois considers Tulsa a second home and has been a part of both Tulsa’s USL Championship Playoff teams, in 2017 as the Roughnecks and in 2020 as FC Tulsa. In fact, Bourgeois has never missed the playoffs in his previous five professional seasons in the USL Championship.

The 27-year-old defender served as the team’s Vice Captain in 2020 and did fill in for former captain Ariel Martínez, due to injury, in one match in 2020. This will be the first time in Bourgeois’s career that he has been named the Captain of his club.

“I am incredibly humbled and honored to be named the captain of FC Tulsa,” said Bourgeois. “I have to thank Mike [Nsien] and the entire coaching staff for this incredible opportunity to wear the armband. Nothing will change with how I go about my business day-to-day. On and off the pitch, this team has a lot of leaders, so I want to empower and support them to make this group the best it can be.”

Da Costa meanwhile is entering his third consecutive season in Tulsa and is already near or at the top of many of FC Tulsa’s offensive statistics. In franchise history, the Brazilian attacking midfielder is first all time in assists (15), third in goals (13), fourth in starts (48) and fourth in minutes (4,225). He is also one of just two Tulsa players to ever make a USL Championship All-League team as he was named to the All-League Second Team following his rookie season in 2019.

Da Costa does have experience with the armband, as he served as Captain in one match in 2019.

“Being named Vice Captain this year means a lot to me,” said da Costa. “Since 2019, I’ve watched the club restructure, and I believe my relationship with the coaches at FC Tulsa has allowed them to trust me in collaborating with the development of the club on and off the field. However, with this great honor also comes great responsibility, and I’m ready to take it on.”

FC Tulsa kicks off its 2021 USL Championship season on Saturday at OKC Energy during the league’s opening weekend. The Black Gold Derby is one of just two league matchups in Week 1, and kickoff is set for 7:30 p.m. Saturday night’s rivalry will be broadcast locally in Tulsa on My41 through FC Tulsa’s season-long broadcast agreement with Fox23.