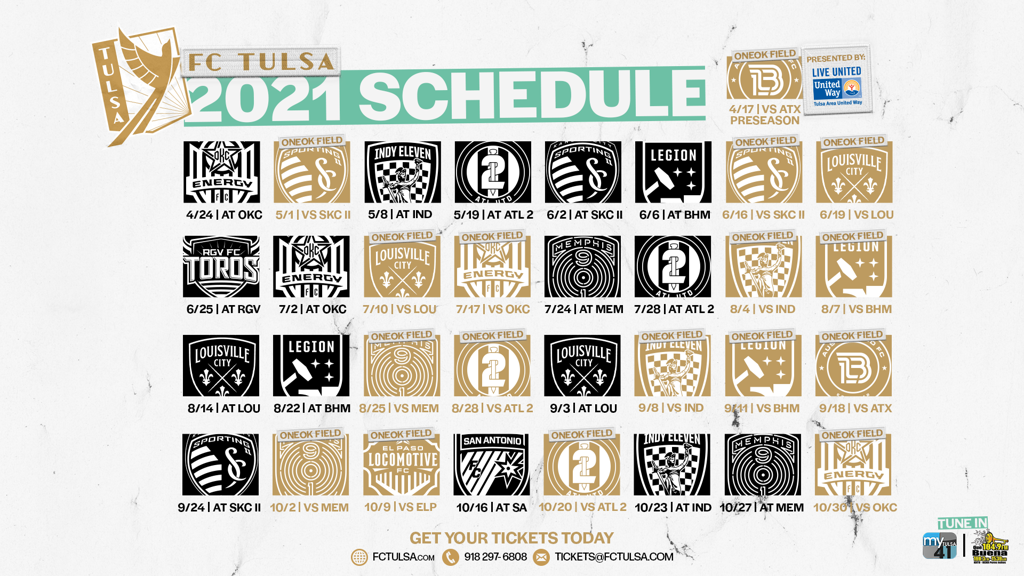 TULSA – The USL Championship officially unveiled FC Tulsa’s full 2021 regular season schedule on Tuesday afternoon, which includes 16 home matches at ONEOK Field. Starting on April 24 and wrapping up on October 30, FC Tulsa will play each of its seven Central Division opponents four times a piece in addition to four other matches outside of the division for a total of 32 regular season matches in 2021.

It will be a road-heavy start to 2021 for FC Tulsa as five of its first six matches, and nine of its first 14 will be on the road to open the season. That will flip at the end of the season as nine of its final 14 will be in the friendly confines of Greenwood, Tulsa. Of the 16 home matches, 11 are on Saturday nights, with the other five played on Wednesday nights. Home kickoffs will occur at 7 p.m. CT at ONEOK Field.

“Coming into a new conference, it’s good to start off with a few games versus familiar opponents,” said FC Tulsa head coach Michael Nsien. “We know 100 pct. that starting the season against Energy FC will get us boiling early. It’s important that we come out right away seeking our best but knowing we will be even better as the weeks go on. Away at Indy on May 8, against a traditional Eastern Conference powerhouse, will be another challenge that we are looking forward to early as well. We will do our best to get to a good level and continue to find improvements and consistency as we navigate the Eastern Conference.”