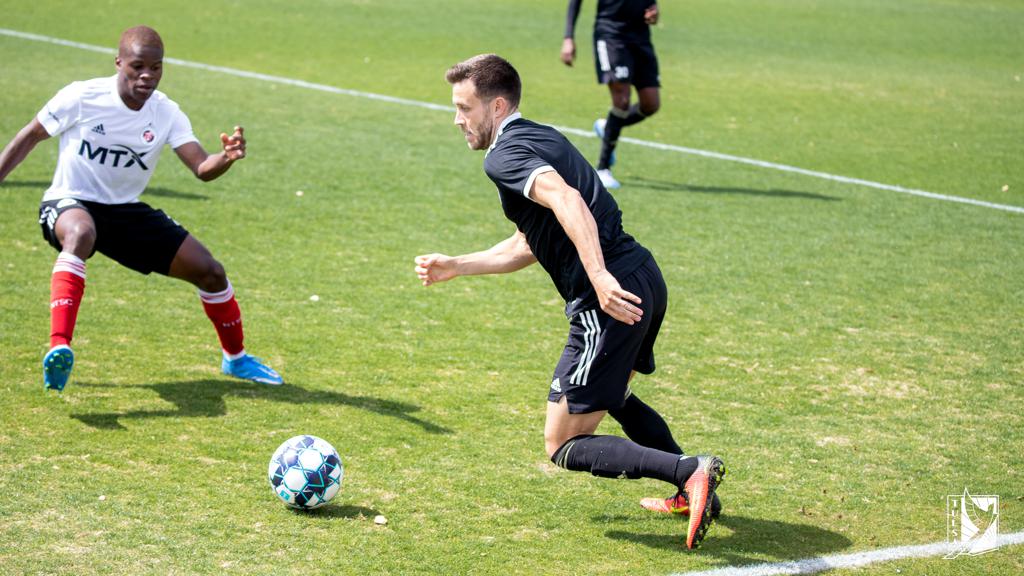 FRISCO – Less than 24 hours after wrapping up its first preseason match, FC Tulsa was back on the pitch for another 90 minutes, this time in Frisco, Texas against North Texas SC of USL League One. After FC Tulsa's starters posted a scoreless first half, three second half goals against many of FC Tulsa's Academy players and trialists gave North Texas the 3-0 win over FC Tulsa.
"I wanted to make sure the group that started the game had a good attitude in terms of what they’re up against, said FC Tulsa head coach Michael Nsien after the match. "After a match and the travel, it's about being positive. Again, there were some moments in the first half, but nothing consistent yet. It’s what we would expect out of preseason. In the second half, it was about giving guys some experience, and they sure got some today.”
In what was already a tight turnaround, the three and a half hour bus ride from College Station to Frisco on Thursday morning set FC Tulsa back even further. That fatigue showed in the late stages of Thursday's match when hosts' fresh legs provided a spark that FC Tulsa couldn't match. Ultimately, it was a second consecutive 90 minutes without a goal.
"The rhythm when you have a new striker, like Jerome, needs to be established with guys like Rodrigo [da Costa], Lebo [Moloto], Eric [Bird] and other guys in the midfield," said Nsien. "These things take time and repetitions, so today was about coaching guys about where to be, and about where to give Jerome that space. We just have to get more repetitions with that.”
An almost identical Starting XI took the pitch in Frisco as the only change from Nsien was bringing midfielder Eric Bird into the lineup for Raphael Ayagwa. Bird had come off the bench in Wednesday's match for limited minutes, but increased that load on Thursday.
It was a bounce back performance from keeper Daniel Gagliardi. After allowing three goals on Wednesday, the Florida native kept a clean sheet in his 45 minutes of action, making two saves.
“Yeah, everything in soccer is – you live and you learn," said Gagliardi. "It’s in the past. I learned from it. All I can do is focus on what’s in front of me. The next ball is always the best ball. We’re learning. We’ve been together for 3 weeks, I met everyone three weeks ago, we’re just continuing to build.”
Two more players earned their preseason debuts as well. Academy player Martin Martinez-Leyva saw his first match action, while late preseason arrival Stanley Oganbor saw limited minutes against North Texas SC. While immigration complications kept Oganbor from the early stages of preseason camp, Thursday's match got the Nigerain forward more familiar with his teammates.
The result was a measure of revenge for the League One side after FC Tulsa got the better of North Texas in preseason during 2020. In that match, Tulsa conceded early, only to score three goals of their own. Unfortunately, that same storyline wasn't to be on Thursday afternoon.

UP NEXT
FC Tulsa will stay in Frisco for another preseason friendly on Saturday morning against North Texas. Kickoff is scheduled for 11 a.m. on Saturday.