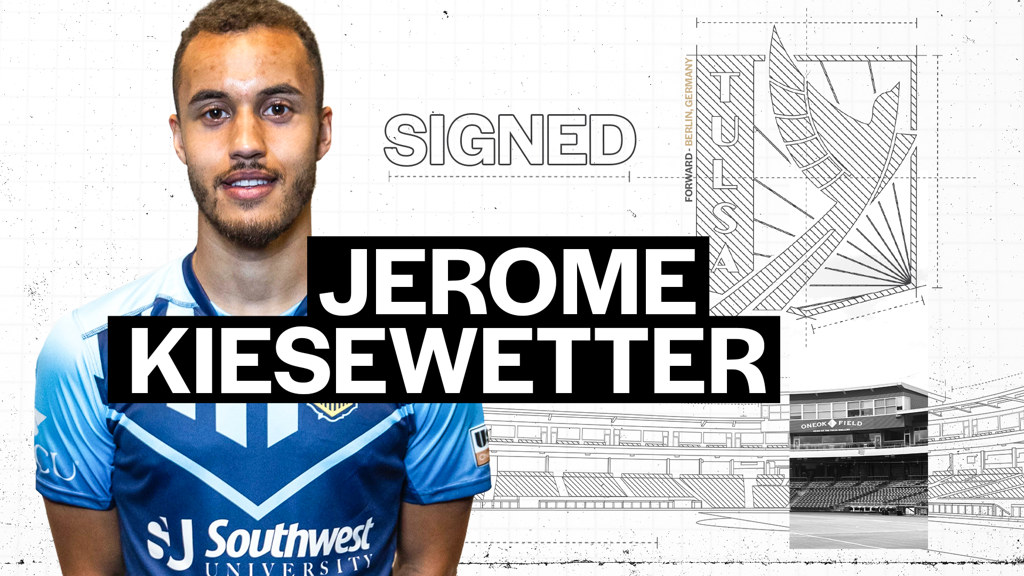 Kiesewetter is first player in Tulsa history with USMNT experience

TULSA – FC Tulsa is adding star power to the top of the lineup in 2021. The club announced the signing of United States international and former Bundesliga forward Jerome Kiesewetter on a multi-year contract. Kiesewetter, 27, is the first player in club history with U.S. Men’s National Team experience.

"Jerome is a player that teams will have to game plan around to nullify his threat," said FC Tulsa head coach Michael Nsien. "He makes excellent penetrating runs in behind defenses that asks them questions. If he is not finding his own space, he is freeing up space for someone else, which is why he will be a great weapon that will complement all of the talent we have put together. All teams that are a legitimate contender for a deep USL Championship run, have players that can hit double digits in goals. Jerome has shown he is capable of that return at this level."

In January of 2016, Kiesewetter took the pitch for his U.S. National Team debut under then-head coach Jurgen Klinsmann. He appeared in two USMNT victories early in 2016 over Iceland and Canada. Those senior team appearances were a culmination of his international career as he played for the United States at the U-18, U-20 and U-23 levels.

Kiesewetter’s performance in the U-23 2015 CONCACAF Men’s Olympic Qualifying Championship was standout as he scored four goals and added two assists in five matches. He was the only American named to the tournament’s Best XI and won the Golden Ball as the tournament's top scorer.

“Tulsa was a really attractive destination for me because of head coach Michael Nsien,” said Kiesewetter. “He showed very early interest in me, and our conversations were great. He convinced me with the way he sees the game, how it should be played and of course with the vision of FC Tulsa’s owners for a successful future.”

Kiesewetter’s pedigree is among the best for any USL Championship player. Growing up in Berlin, the German-American played in the youth system of Hertha BSC. He broke out as a professional with VfB Stuttgart, working his way up to make his Bundesliga debut in 2015 with Stuttgart. He made two appearances in the Bundesliga in 2015 before signing with Fortuna Düsseldorf in 2016.

The striker made his move to the U.S. in 2019, signing with El Paso Locomotive FC in the USL Championship. Kiesewetter took the league by storm, scoring 10 goals in his first 10 matches with El Paso, winning the May Player of the Month award in 2019 and was selected to four Team of the Weeks.

His success in the USL Championship led to an opportunity in Major League Soccer in 2020 with expansion club Inter Miami CF. Kiesewetter appeared for Miami in both the MLS Is Back Tournament and the MLS regular season and also played for the club’s USL League One team, Fort Lauderdale CF.