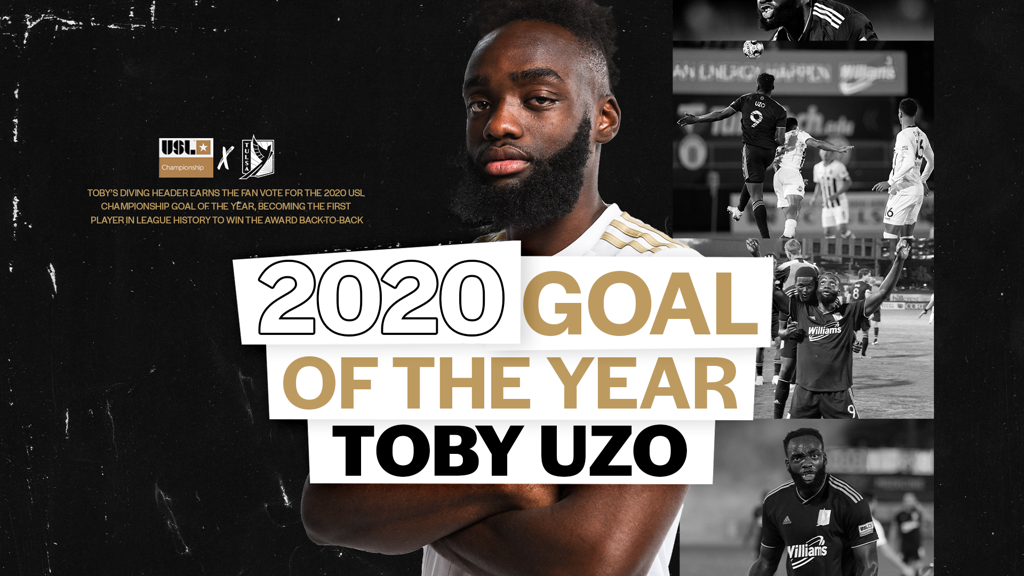 TULSA – Toby Uzo has another award to add to his trophy case. The forward who has played for FC Tulsa each of the last two seasons won the 2020 USL Championship Goal of the Year for his diving header from outside of the box to beat OKC Energy FC on September 30. The honor will go alongside his 2019 USL Championship Goal of the Year award, his 2020 FC Tulsa Performance of the Year award and the Wrench he won over OKC this season.

Uzo won the league’s fan-voted competition over 15 other nominated goals across the USL Championship in a single elimination voting tournament which finished Monday morning. The FC Tulsa forward won the final vote over New Mexico United’s Saalih Muhammad, earning 53% of the fan vote and becoming the first player in USL Championship history to win the award in back-to-back years.

The Goal of the Year was Uzo’s second goal of the match—a stunner which sent ONEOK Field into a frenzy and brought the Wrench back home to Tulsa. Uzo had leveled the match 2-2 in the 79’, and in the 88’ he took flight 19 yards from goal and headed a ball past OKC Energy FC goalkeeper Cody Laurendi to win the match.

“I first of all want to thank God because it’s a blessing to score two Goal of the Year-worthy finishes in two consecutive seasons,” Uzo said. “I also want to thank the fans, friends, and family that voted, my support group is amazing. I love you all. Also thank you to the FC Tulsa organization and my teammates for making it possible.”

Uzo had two goals in the 2020 season in nine appearances for FC Tulsa.