"One ticket for Penny" – Why October means more for Bradley Bourgeois 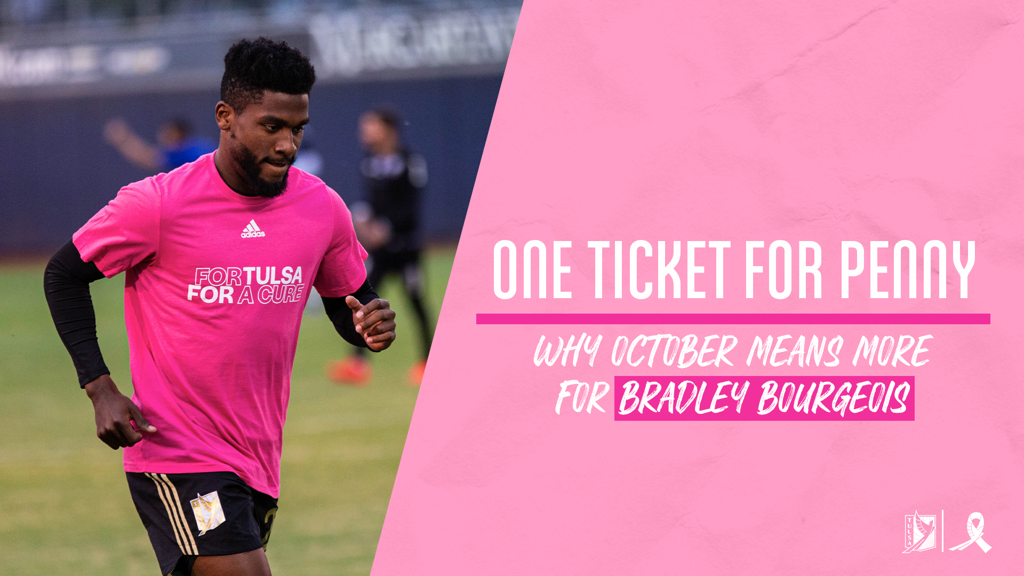 "It’s truly just a testament to how strong my mom is.”

On October 10, as Bradley Bourgeois stepped up to take a critical penalty kick in El Paso, Texas, almost everyone in the building was rooting for him to miss. Almost everyone. Sitting along the midfield line, just behind the 3rd base dugout in the baseball park converted to soccer pitch, was his mom, Penny.

Penny Bourgeois is always there. She made the 713-mile journey from the Bourgeois' hometown of Cyprus, outside of Houston, Texas to El Paso just like she’d made the nearly 500-mile trek from Houston to Tulsa dozens of times. She’s gone just about everywhere to watch Bradley play.

“It started to become a joke during college that whenever we had away games,” Bradley said. “I would tell the team admin or one of the coaches that I needed an extra ticket to wherever we went. So, we’d show up to St. John's [in New York] or wherever we're playing, whatever school, USF, UCF [in Florida], and she would too.”

Bradley always knew that his mother was going to be there. What he didn’t know, was that all those times she was driving eight hours to watch him battle on the pitch, she was fighting her own secret battle against breast cancer. Penny would get her treatments in the morning before jumping in the car and making the trip to Tulsa or wherever Bradley was playing.

"I need one ticket today.”

“Did you talk to your mom?”

“No, but I'm pretty sure she is going to show up.”

“She’d do treatments in the morning, then drive that drive from Houston to Tulsa for my game,” Bourgeois said. “She’d drive eight hours. Just to watch my game. And she wouldn't stay the night, too. She just drove right back. She’d always say, ‘I'll just rest on Sunday for a little bit. Then I'll go to work.’ That's what she says she did. And she still does it sometimes.”

Penny was diagnosed with breast cancer in early 2013 while Bradley was a freshman at the University of Tulsa. But, it wasn’t until that Christmas that Bradley found out.

“She hid it from me.” Bradley said with a chuckle. “I'll never forget. At the time when I was in college, one of my brothers lived in Atlanta, my oldest brother was working on his PhD at Ohio State. We don’t really get together very often, throughout my whole life. My brothers are eight and 10 years older than me. Now, one’s in Miami, I'm in Oklahoma, the other’s in California.

“The only times we truly get together as Christmas. So, when my mom was like, ‘Hey guys, everybody at the kitchen table,’ I'm like, that's weird. We eat dinners together, but it was nothing like that. We weren't going on a vacation, no one was packed, no one was ready for that.”

As she gathered everyone around the kitchen table, Bradley knew that something was up.

“It was a true, ‘what's going on’ kind of thing,” he recalled. “She says she wants to talk to everybody, but just the way she said it was like, ‘I'm going to break some news to you that I know you don't want to hear.’ But you got the feeling it, at the same time, it was an ‘I’m alright’ kind of thing. I kind of already knew what was going on before, because I've heard it in her voice when it came to my dad.”

Bradley’s father, Jeffery, has overcome his own battles with health as well. Before Bradley was born, his father had kidney transplants which have continued to affect him. When Bradley was very young, Jeffery was diagnosed with and beat prostate cancer. 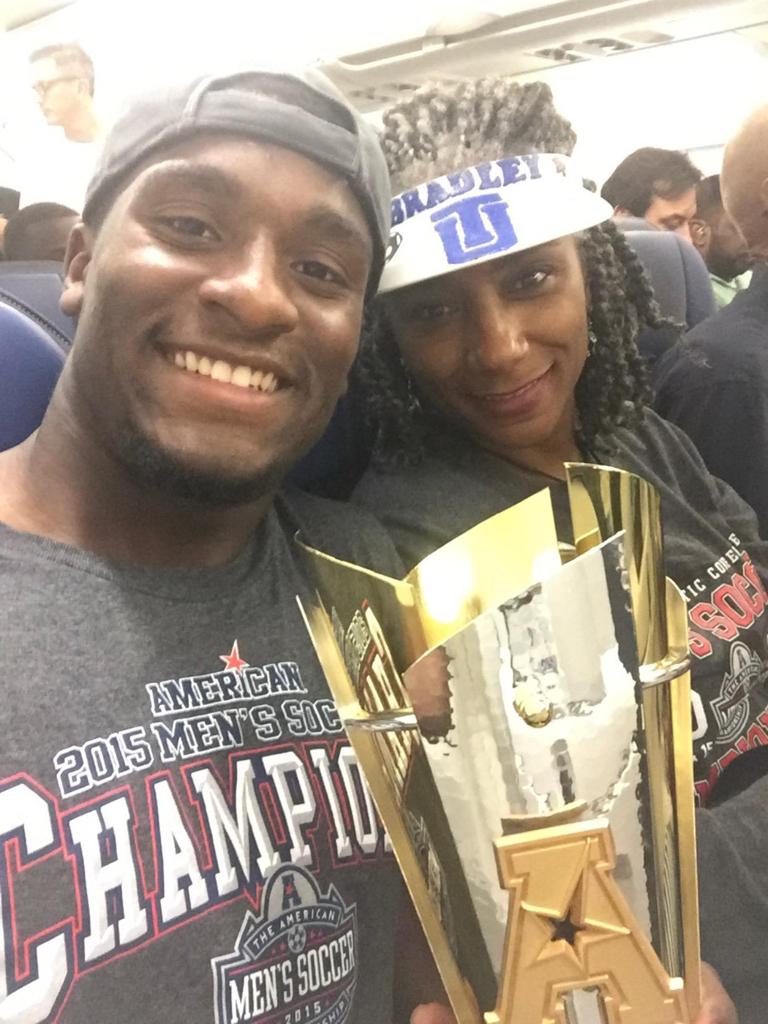 Bradley and his mother, Penny, after winning the 2015 American Athletic Conference championship

“So she just said it. ‘I have breast cancer.’ It was a total jaw drop moment. My immediate thoughts were like, ‘what’s next?’ With the way she told us, I was under the impression that she just found out when she said it. So then to find out that she's had this whole disease for like seven, eight months, I was shocked.”

She would go everywhere to watch Bradley play. It was rarely planned, even Bradley didn’t hear that she was going to be there. But she was there, she’s always there.

“She started to surprise me [at games]. She surprised me like four or five times, catching me off guard like four or five times. I told her, ‘Mom just tell me when you’re going to show up and I’ll get you tickets.’ And she's always say, ‘No, I don’t want you to worry.” Worry about what? She said she just wanted me to focus on my life and she’d just watch. She just wanted to watch me from the sideline.”

From that day forward, Bradley would leave her a ticket to the match, not knowing for sure whether she would show up. There was always one ticket for Penny Bourgeois.

“Every time I get on the field, whether it was at TU, with Houston [Dynamo], Nashville or here in Tulsa, before I start a match, I always look in the stands to find my mom. Because I would say 95% of the time, she's there.”

Penny had always told Bradley and his brothers to just be kids. She told them to enjoy being a kid and let the adults handle the adult stuff. It was important to her that Bradley got the opportunity to enjoy being a college kid.

“She knows I’m a mama’s boy,” Bradley said. “I would have just been panicking all the time. For her to take care of that by herself or with my dad and keep moving forward and not miss any games, to keep things as normal as possible. It's truly just a testament to how strong my mom is.”

Penny would go into remission after about a year of treatment. Unfortunately, her battle was not done. Two years later, the cancer would return, stronger this time.

"It's truly just a testament to how strong my mom is."

During the second battle, there was no hiding her diagnosis from her children. Penny would have to get surgery.

“If my mom could have had breast cancer treatments, radiation, and had the surgery without me knowing, that's exactly what she would have done,” he said. “But this was later on, around my senior year at TU. This time she tells us when it happens. Because this time, she has to get surgery, so there's no hiding it. She knew she couldn’t keep going to treatment then showing up at games, because she’d be in the hospital, so the jig was up this time. She let us know this time, and she had her surgery to have a large chunk of the cancer removed.”

But if Bradley thought this would keep Penny from being at as many games as she could, he was wrong. The doctors gave him specific instructions: whatever she was able to do, or was capable of doing, or wanted to do, Bradley and his family were to allow her to do it.

And she didn’t miss a game.

There are many people that Bradley would credit for helping turn him into the player he is today, but Penny is at the top of his list.

“Just control the things you can control, and the rest will take care of itself,” Bradley said when asked what he learned from those years his mother battled cancer. 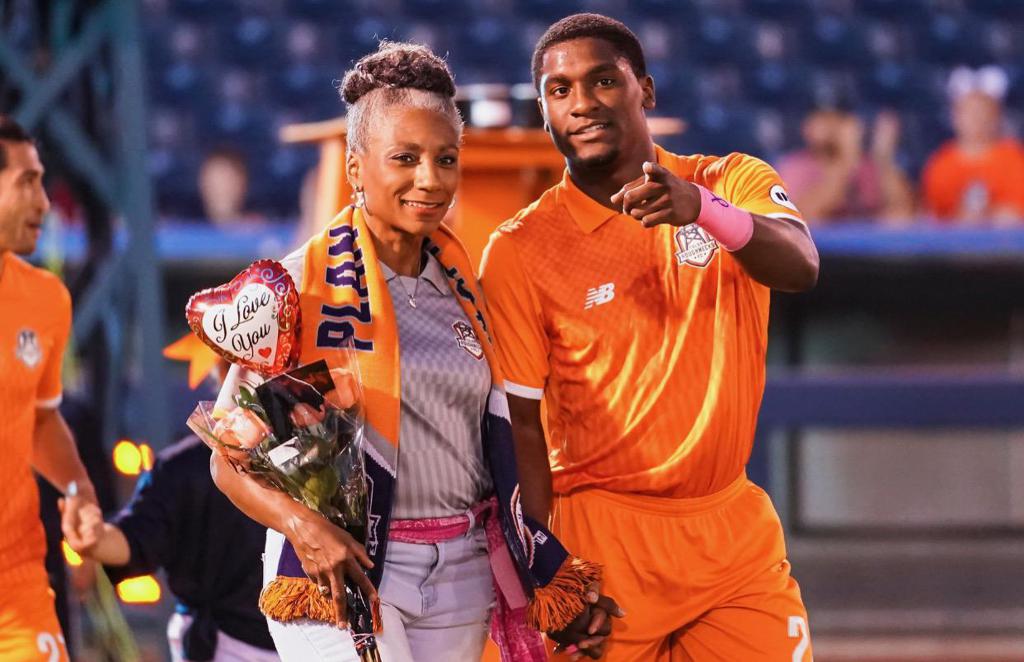 Bradley and his mother, Penny, at the Breast Cancer Awareness night match in 2017 while Bradley played for Tulsa Roughnecks FC

Penny Bourgeois has been cancer-free since 2016, and she and Bradley remain incredibly active in their communities, using their stories to raise awareness and money to fund breast cancer research.

“So this month is different now because since 2016, she’s been cancer free. She does the walks every year. October means a lot because I’ve had my mother, who I'm very close with, show me how much strength and courage she has through this fight.”

Bradley is an ambassador for the American Cancer Society, and since his time in professional soccer has put on several events to support the cause. He’s auctioned signed items and promoted donation efforts and his story through the Real Men Wear Pink initiative. Bradley played a major part in organizing and producing this year's "For Tulsa, For a Cure" shirts that the players wore before the regular season finale.

“I make it a goal to work with them every year,” Bradley said. “Because there are a lot of families who need help with breast cancer. It’s something that I feel like affects people more than other things because it's affecting the women in our life. Everybody has a mother, right? That’s how you were brought into this world, and you just don't want something to tear them apart from the inside. You can protect your mother from the outside factors, but to not be able to protect them from something that's inside, that's what's going on, and it's tough and it hits differently. They say women move this world. You can't live in this world without women, without your mothers, without your sisters, your daughters.

“I want to do everything I can to help the doctors find cures,” Bradley continued. “But whenever I think about breast cancer, it's something that's affecting and killing the women in our lives. I don’t want anyone else to go through that. I don't want anyone to have to worry. To partner up with the American Cancer Society, to work with them and doing whatever we can to raise donations, at the games, through shirts, is important. In the everyday community, making people more aware of how serious it is, because I don't think a lot of people really care until it affects them. I want it to get to the point where it's affecting them to care.”