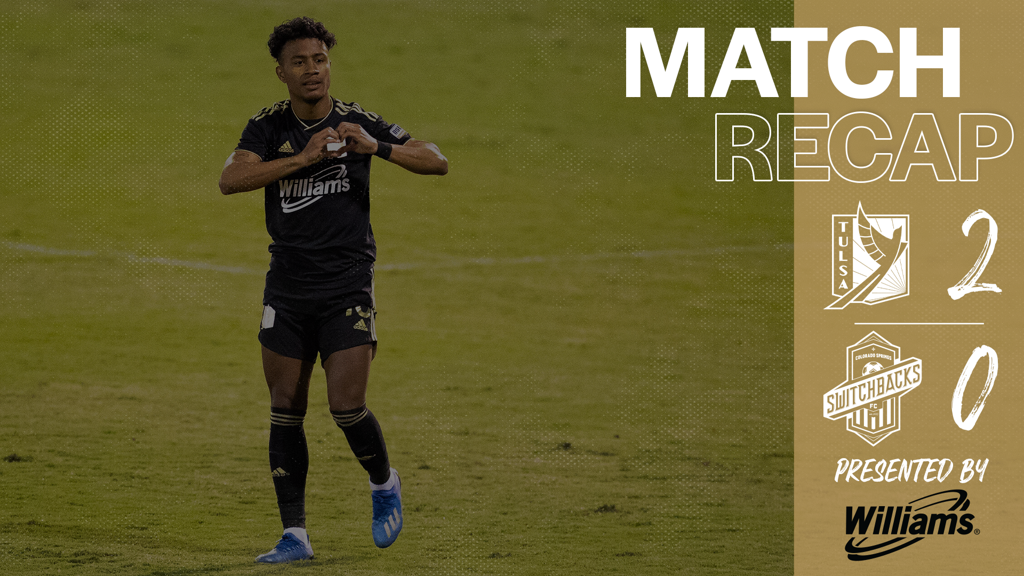 TULSA – Win, and in. It was as simple as that for FC Tulsa on Saturday night. In fact just a point would have clinched a playoff berth. Nevertheless, FC Tulsa defeated Colorado Springs Switchbacks FC 2-0 in commanding fashion at ONEOK Field in the final regular season match of 2020.

In a match where FC Tulsa held over 55% possession and completed nearly 90% of its passes, the hosts dominated from start to finish. FC Tulsa logged 10 shots on goal while allowing zero. In front of a raucous ONEOK crowd celebrating Soctfest and Real Men Wear Pink night, there was even more to celebrate early as Marlon and Rodrigo da Costa netted early goals to set FC Tulsa off and running.

The first came from Marlon in the 36’. Rodrigo da Costa lifted a delectable ball towards the back post, and Marlon headed it back across goal and into the bottom left corner. Da Costa would get his own goal to go with his assist just four minutes later, when a pass from Ariel Martínez would send him through on goal for a one-on-one with Switchbacks keeper Sean Melvin. Da Costa settled himself and lifted a shot over the outstretched hands of the keeper and into the net for 2-0.

It would go into the half that way, and it was much of the same in the second half. FC Tulsa was happy to control the ball, suffocating any Switchbacks FC possession and causing mayhem in the attacking third. While the second half was goalless, the message was clear, FC Tulsa is not playing around.

The win means FC Tulsa clinches a playoff spot for the second time in franchise history, as well as extends its unbeaten streak to a club-record seven consecutive matches. The USL Championship playoffs are all about getting hot at the right time, and riding a wave of three straight wins and four in its last seven will be crucial for FC Tulsa.

1) USL Championship Playoffs
The USL Championship playoffs begin next weekend, and for the second time in franchise history, FC Tulsa is going dancing. Only once before, in 2017, did the then-Roughnecks advance to the postseason. FC Tulsa will travel to face the winner of Group C, which could be El Paso Locomotive FC or New Mexico United.

3) Marlon is Streaking
FC Tulsa have had some guys get on a scoring streak this season, and Marlon is the latest to jump on that train, scoring two goals in the last two games and absolutely wreaking havoc on the wings for the attack.

Up Next:
FC Tulsa will await the rest of the weekend’s results to find out its first-round opponent. As it stands, El Paso Locomotive FC sits as the Group C leader, but New Mexico United could still sneak its way into the top spot with an El Paso loss on Sunday evening and a win at RGV FC on Tuesday.