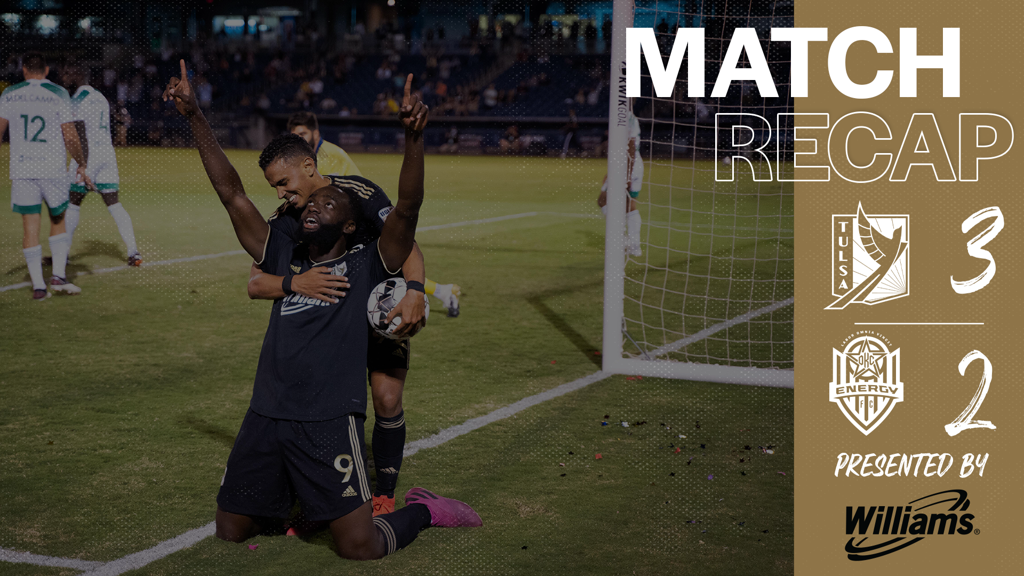 TULSA – The wrench resides in Tulsa. In another historic night at ONEOK Field, super sub Toby Uzo scored two goals in the final 10 minutes to bring FC Tulsa back from the brink of defeat and win the wrench 3-2.

The match was bogged down with nearly 40 fouls as OKC Energy FC tried desperately to hang onto a 1-0 lead, and then a 2-1 lead after Tulsa equalized and conceded before the 60’. As Tulsa searched for a goal to get back into it, the water break came in the 77’. Head Coach Michael Nsien gathered the squad together and urged them on for the final minutes.

In the same break, he brought on two substitutes that would change the match. Toby Uzo and Cristhian Altamirano came onto the pitch, and with their first touches on the pitch, Altamirano lifted a ball into Uzo and the Nigerian center forward headed it into the back of the net to equalize with 10 minutes to go.

At 2-2 with game on, Altamirano and Uzo went back at it again. In the 88’ now, the ball came to Altamirano and the Honduran chipped it towards Uzo. As he lept off the ground from the top of the 18-yard box, Uzo dove and flicked it towards goal with pace. Energy FC goalkeeper Cody Laurendi got a paw to it, but it was not enough to stop it from entering the back of the net and Uzo from entering the annals of FC Tulsa history.

The win clinched the wrench for FC Tulsa, and as the team gathered to celebrate the win, the newly painted gold wrench glimmered in the Tulsa moonlight.

1) That’s it. 1. ­– FC Tulsa’s magic number to clinch a playoff spot is down to just one. With the win tonight and RGV FC getting its first win of the season against Austin Bold FC, FC Tulsa sits three points ahead of the Bold with just one match to go for Austin. A point on Saturday for Tulsa would mean that Austin cannot catch up, and FC Tulsa will be into the playoffs.

2) The Wrench is on Tulsa Time – For the second time in Black Gold Derby history, the Tulsa USL franchise has won the wrench. In the first year of this new era of the club, FC Tulsa had a record of 1-0-2 against the team from down the turnpike this season.

3) Toby Uzo super sub – Uzo’s role this season has been that of an impact player off the bench. The 2019 USL Championship Goal of the Year winner made his mark in a big way tonight, scoring two goals off the bench and earning a dramatic, come-from-behind three points for the Tulsa club.

Up Next:
FC Tulsa has one final match remaining in the regular season, and just a result will clinch the playoffs for the club. It all goes down at ONEOK Field as FC Tulsa hosts Colorado Springs Switchbacks FC, with kickoff set for 7 p.m. Get your tickets at fctulsa.com/tickets and don’t miss what will be a historic day for FC Tulsa.