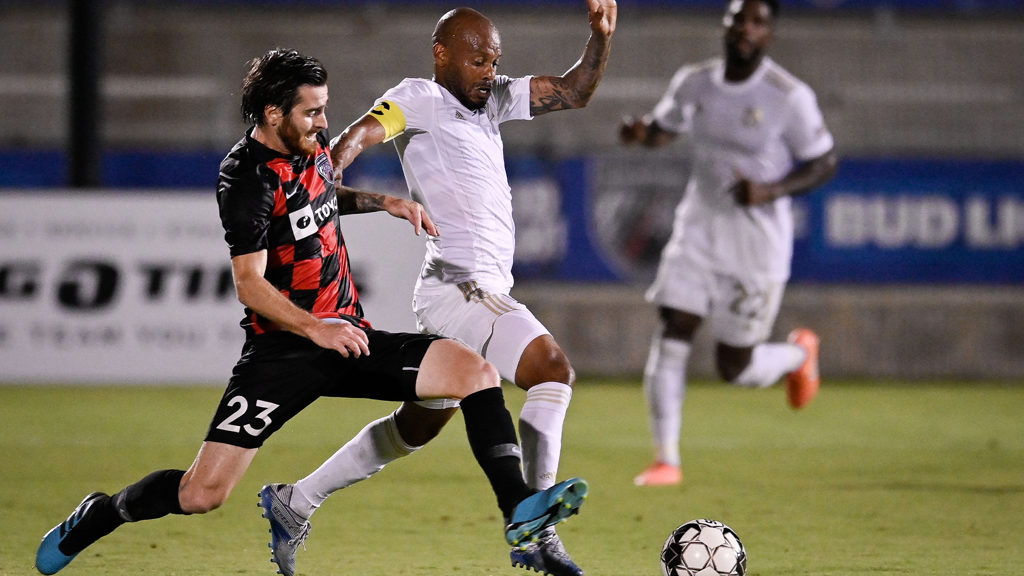 SAN ANTONIO – FC Tulsa’s unbeaten run unceremoniously came to an end in Texas Saturday night with a 2-0 loss to Group D leaders San Antonio FC. After an inadvertent handball in the box towards the end of the first half, SAFC’s Luis Solignac scored the penalty to take the lead into the break, 1-0.

FC Tulsa was lively in the second half, including its best chance of the night in the 60’ when the ball fell to Marlon in the box, but the Brazilian’s shot couldn’t find its way through the forest of all of San Antonio defenders and was cleared off the line.

The match got away from the visitors when in the 87’ Fabián Bastidas was given a straight red, and just moments later San Antonio FC iced the match with a goal from the substitute Ignacio Bailone to make it 2-0.

Things went from bad to worse when, just seconds from the referee blowing the final whistle, Eric Bird was sent off in the 90’+8. FC Tulsa’s record-setting unbeaten run comes to an end, but the chance to bounce back comes in one week when FC Tulsa returns home to face Sporting Kansas City II on Saturday August 29.

Here are three takeaways from tonight’s match.
1) Another stellar night from Sean Lewis – FC Tulsa’s netminder was immense again for the squad, as Lewis recorded six saves that, at times, kept FC Tulsa in the match. Tonight’s performance brings Lewis to 25 saves on the season, which already makes for the third-highest season total in his career. His 78.1% save percentage is the best of his professional career.

2) Match officials allow San Antonio FC to sub at four different windows – Due to the COVID-19 pandemic, the International Football Association Board (IFAB) allowed the use of more substitutes per team, expanding the amount from three to five per match. However, teams can still use just three windows outside of halftime to make substitutions. In the second half of tonight's match, San Antonio FC made a sub at four different windows, one more than the limit.

3) Better days lie ahead – FC Tulsa suffered a tough setback tonight, but the club has the chance to build momentum going ahead, as it plays six of its remaining nine matches at ONEOK Field. The opportunity to rack up points at home will be a big advantage for the club in the push for a playoff spot.

Up Next:
FC Tulsa has a week off before it returns to action at ONEOK Field on August 29 against out-of-group opponent Sporting Kansas City II. Kickoff is set for 7 p.m. from Tulsa, and tickets are on sale now at FCTulsa.com/Tickets.