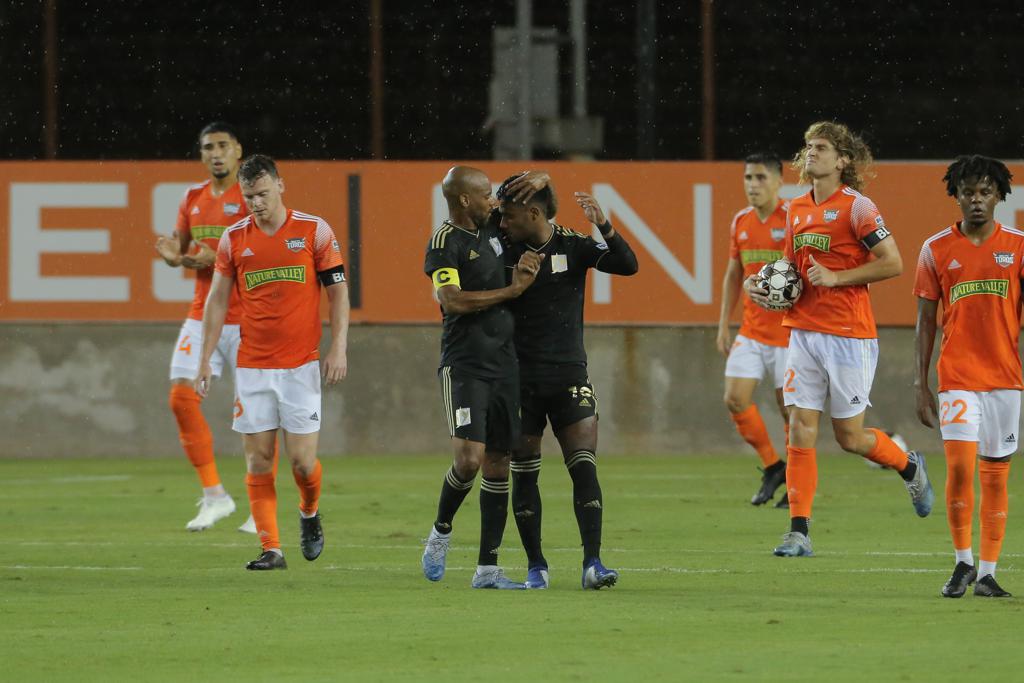 EDINBURG, TX – The 2020 USL Championship season is not normal. And Saturday night’s contest between Rio Grande Valley FC Toros and FC Tulsa may just have encapsulated that when it finally finished in the wee hours of Sunday morning, 2-1 to FC Tulsa.

The match was initially slated to begin at 8 p.m. CT, but that all changed when kickoff was delayed more than three and half hours due to lightning in the area. By the time the teams took the pitch for the 11:34 p.m. kickoff, every other USL Championship match was finished and all that was left was the 90 minutes that laid ahead for the boys in black and gold.

The visitors came out on the attack early, with captain Ariel Martínez looking up for it early on, creating chances and splitting defenders. FC Tulsa would get its breakthrough in the 26’ through Marlon as the Brazilian blasted home a rebound off a corner. FC Tulsa had seen the majority of the chances and found the ball in the back of the net again in the 41’ via Rodrigo da Costa’s finish, but the goal was ruled off for offside.

As soon as the referee had ruled the goal out, the whistle blew again. The match was suspended due to lightning for a second time, and this time the suspension would only last an hour and a half. At 1:32 a.m. on Sunday morning, the two teams came back out to finally finish the match.
FC Tulsa and RGVFC finished the last couple of minutes of the first half, but halftime consisted of the two clubs just flipping sides of the field and resuming play.

In the 71’, off an RGV corner, Robert Castellanos leapt off the back of the substitute, Vangjel Zguro, and headed it into the back of the net to equalize. The match stayed level for approximately 180 seconds though, because the captain, Ariel Martínez, slotted home a penalty to take the lead again. That’s how it would end, 2-1 to FC Tulsa, three points coming back to Oklahoma after the first win of the FC Tulsa era.

Here’s three takeaways from the 90 minutes on the pitch, even if it took over six hours to get it done.

Brazilian firepower
Rodrigo da Costa had scored the club’s two regular season goals coming into this one, and it was a Brazilian once again who netted for FC Tulsa, but it was the winger Marlon who scored the opener in the 26’.

Grabbing the bull by the horns
FC Tulsa’s opening goal gave the club its first lead of the 2020 season, a lead that it would keep until RGVFC’s equalizer in the 71’. The match would not stay level for long though, because Ariel Martínez banged home a penalty just 3 minutes later, and FC Tulsa would keep that lead until the final whistle.

Rained on their parade
FC Tulsa nabbed its first win of the club’s new era in this rain-soaked, lightning-delayed affair in the south of Texas. FC Tulsa has now earned five points from its three road matches to open the season, a new record for FC Tulsa through the first three matches of a season.

Up Next
FC Tulsa will play its fourth consecutive road match next Saturday, August 8 against out-of-group opponent Saint Louis FC. Kickoff is set for 8 p.m. on that one as well, but as we learned tonight, we’ll see.