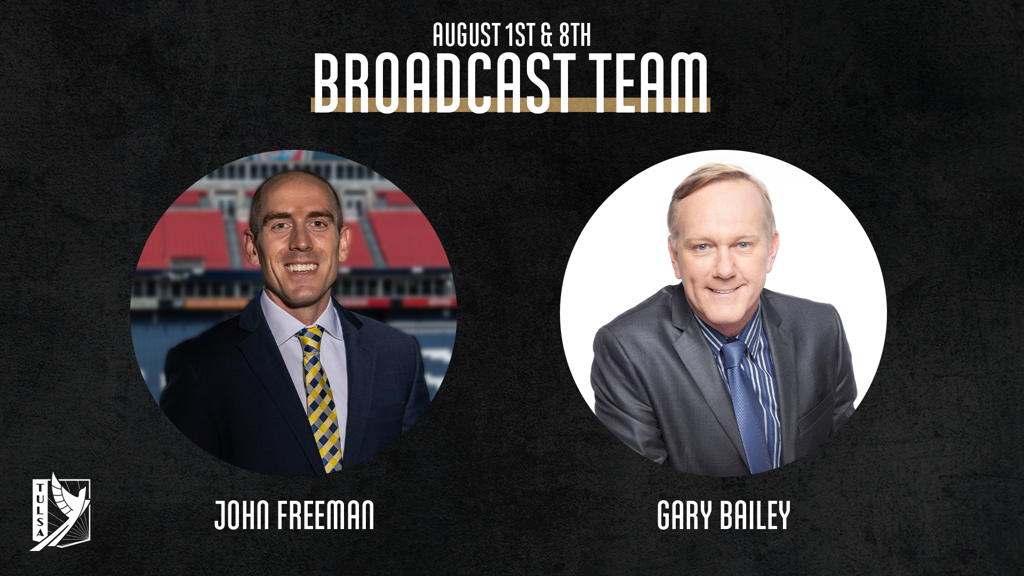 John Freeman, of MLS, and former Manchester United legend Gary Bailey to be on the call

TULSA ­– A couple of premier broadcasting voices will be behind the mic for FC Tulsa’s next two road match broadcasts on My41 Tulsa. MLS play-by-play announcer John Freeman will be accompanied by former Manchester United goalkeeping legend and color commentator Gary Bailey for FC Tulsa’s road matches at Rio Grande Valley FC Toros on Saturday and at Saint Louis FC on August 8.

Freeman, an up-and-comer in American soccer broadcasting, is currently the radio play-by-play announcer for Nashville SC of MLS, but is very familiar with the USL Championship having been the voice of Nashville for each of their two USL Championship seasons in 2018 & 2019.

“I'm thrilled,” said Freeman. “The last match between two professional teams that I called was Nashville SC vs. Portland Timbers at a sold-out Providence Park in Portland. Who would have thought the next game I'd call between two pro teams would be four months later at the southern border of the U.S. in an empty stadium? I've gained a lot of perspective in 2020 about how lucky I've been to call soccer matches. If it sounds like I'm calling the match with the enthusiasm of a Champions League Final, it’s because that's what it will feel like to me.”

A University of Virginia grad, Freeman boasts an impressive announcing résumé spanning from calling Virginia’s NCAA College Cup winning season in 2014 to international feeds of select She Believes Cup matches in 2019. With his previous experience, Freeman has called matches for numerous FC Tulsa players including Eric Bird while the two were at Virginia and Bradley Bourgeois and Lebo Moloto at their previous stop at Nashville SC.

Along with Bird and Moloto, Freeman worked with numerous FC Tulsa front office staff members including president James Cannon during his time with Nashville SC.

“Having worked with much of the club’s front office staff, very little in these last 9 months have surprised me,” said Freeman. “Those people have only the highest standards and everything that the club has produced since their arrival has aligned with that. From the branding to the marketing and social media to the ticket offers, local TV deal and roster construction, there’s nothing that hasn’t been first class. I may live 600 miles away, but I don’t need to be close to know the quality of this club and its commitment to serving its city.”

The match will be the first time that Freeman and Bailey have worked together as an announcing pair, but the chemistry shouldn’t be an issue between the professional duo.

“I'm greatly looking forward to working with Gary,” said Freeman. “I've worked with some tremendous analysts over the years, but this is the first one who's made Sir Alex Ferguson's teamsheet. His perspective as someone who's played at the highest level in the world and as a goalkeeper should add some additional insight for the already-informed soccer audience in Tulsa.”

Bailey, a Red Devil stalwart in the late 1970s and 80s was a two-time FA Cup winner with Manchester United in a stellar playing career. An England National Team player that was a part of England’s 1986 World Cup squad in Mexico, Bailey is one of the best keepers in Manchester United storied history. He played in 375 first team matches with Man U, ending his career under manager Sir Alex Ferguson.

The goalkeeping legend is not unfamiliar with pro soccer in Tulsa. Former Manchester United teammates of his played for the Roughnecks at various points in each of their careers. One summer, Man U came to America for a preseason tour, playing the Portland Timbers and Seattle Sounders.

“A couple of players I played with came out and played for Tulsa [Roughnecks], David McCreery and Chris McGrath,” said Bailey. “Bill Foulkes was an ex [Manchester] United legend and he was a manager a while back. A lot of English players were all ex Tulsa players and big names back in England at the time I was playing. It was fun touring here and it’s a shame [the NASL] collapsed.”

Following his player career, Bailey stepped into the broadcast booth and has called matches across the globe. He currently works as a color commentator for BeIN Sports in Miami, calling Spanish and French matches, and for the USL Championship. It will be the first time Bailey has called a Tulsa match.

“I’m very, very keen to see what this new franchise is doing in terms of how they’re playing,” said Bailey. “Who are FC Tulsa? How do they play? What’s their character? Where are they different from Phoenix Rising, Orange County FC, and Rio Grande Valley FC. That will be your identity, and you’ve hit the reset button so come out and show us who you are. That’s exciting to watch because I don’t know who that is. This weekend will be a good indication of who FC Tulsa are.”

As far as the Saturday night’s match is concerned, both commentators are intrigued at what result FC Tulsa will produce on the pitch.

“FC Tulsa is the only team in the league without a loss and without a win,” said Freeman. “With a shortened season, every match feels like two. There’s going to be an increasing urgency to every game moving forward and this one will surely have an added intensity to it. You’ve got a new-era Tulsa club packed with talent that’s been craving a first win for four months and a desperate RGV squad eager to lift a city that was rocked by a hurricane this week. How that plays out on living room TV screens in Tulsa, I can’t wait to find out.”

Fans in Tulsa can tune in to Saturday’s broadcast free over the air on My41 Tulsa and around the nation on ESPN+. Kickoff is scheduled for 8 p.m. in Edinburg, Texas.