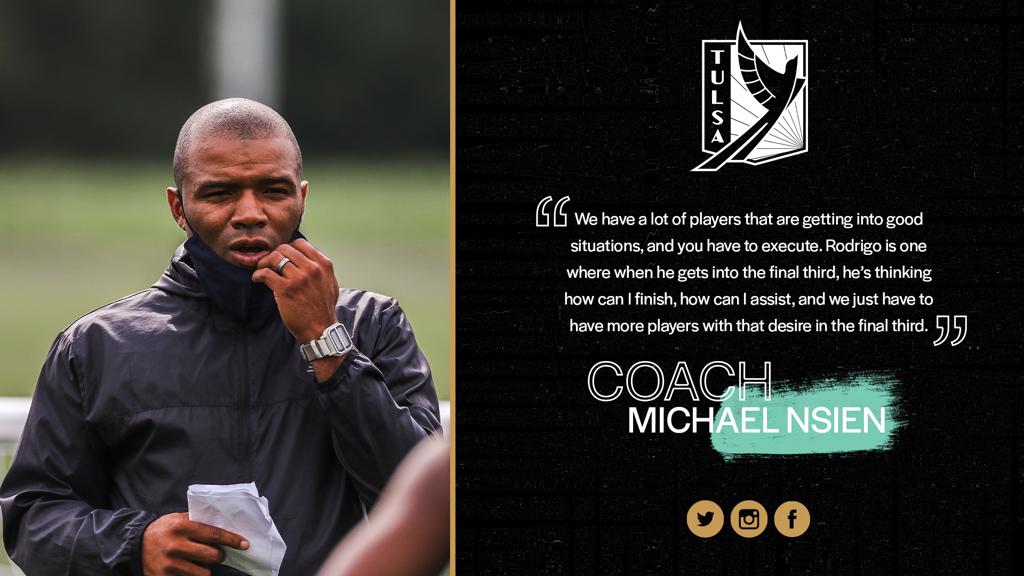 "For our first game back I think it was really good.” - Rodrigo Da Costa

TULSA – In FC Tulsa’s first match since the season restart, Rodrigo Da Costa’s first half equalizer kept Tulsa unbeaten in 2020 and jumpstarted the club’s return to play with a 1-1 draw against rivals OKC Energy FC.

“It was a good performance if you think about how we are almost two months without practicing and practicing as a group,” Rodrigo da Costa said after the match on Monday. “Of course, we have a lot of things that we need to stop and watch again and see where we can get better but, for our first game back I think it was really good.”

Rodrigo Da Costa’s goal is his second of the season, and the second time he’s pulled FC Tulsa back level for the draw. Da Costa, who led FC Tulsa in goals and assists last season, is already off to a hot start in 2020.

“I think with Rodrigo [Da Costa],” FC Tulsa Head Coach Michael Nsien said, “the difference is, and what we want more of, is objective players. To win games, to get points, you have to score goals. We have a lot of players that are getting into good situations, and you have to execute. Rodrigo is one where when he gets into the final third, he’s thinking how can I finish, how can I assist, and we just have to have more players with that desire in the final third.’

It was a four-month suspension of play for the USL Championship, and as teams returned to the pitch this weekend, it was about getting back to that midseason level of fitness.

“I told the players you want to manage expectations,” Nsien said. “It’s not going to be perfect. I think a lot of the frustration came once we got into the game and we felt like we could really take three points and we were sputtering, like is to be expected after a four-month layoff.”

A draw on the road in the Black Gold derby is certainly a good result to start the season, and with the next two rivalry matchups to take place at ONEOK field, all eyes are on the wrench down the stretch.

“We expect that when we come back home, we take care of the job,” Nsien said. “We would have liked to do it here, but one thing we need to improve on is the home-field advantage. Even though could be some limited fans and things like that, we have to take care of business. I think a lot of teams maybe they won’t feel that home-field advantage if there are not many fans, but we still have to have the attitude that it’s our home and we expect three points every time.”

The FC Tulsa home opener is less than a month away. Be sure to order your FC Tulsa Season tickets today and lock in the lowest prices in the USL Championship for life at ONEOK Field. Contact an FC Tulsa ticket representative at 918-297-6808, email tickets@fctulsa.com, or head to fctulsa.com/season-tickets.