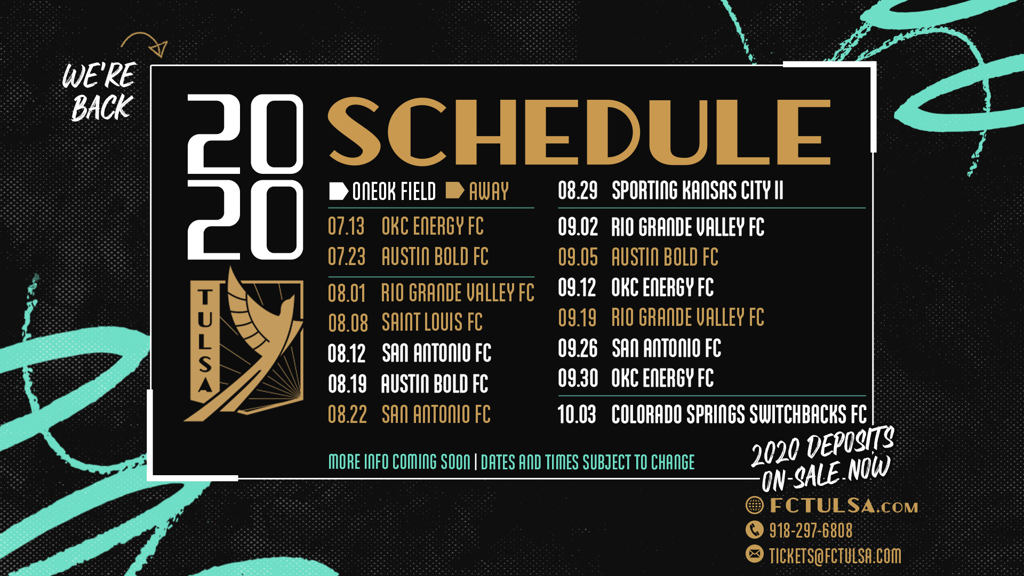 TULSA – FC Tulsa will take the pitch at ONEOK Field for the first time in 2020 on August 12. It’s just one of the highlights of FC Tulsa’s full 15-match revised schedule that was announced Thursday afternoon by the USL Championship. In addition to its home opener date, FC Tulsa’s schedule features two home matches against rival OKC Energy FC and a three-match homestand to close out the regular season.

Overall, FC Tulsa will play 15 matches between July 13 and October 3 in a World Cup-style group format, with the top two teams from each of the eight groups advancing to the 2020 USL Championship Playoffs. As was announced previously, FC Tulsa will compete in Group D alongside Oklahoma rivals Energy FC, and three Texas clubs–Austin Bold FC, Rio Grande Valley FC, and San Antonio FC.

Outside of the three matches against each of their Group D opponents, FC Tulsa will face Sporting KC II, Saint Louis FC and Colorado Springs Switchbacks FC in matches outside of group play. Every match will count towards their 2020 points total and determine the standings in Group D.

“The schedule will be demanding for everyone,” said FC Tulsa head coach Michael Nsien. “Although they’ve regionalized the competition, there is a short turnaround on numerous occasions. This season will require squad depth, and well-managed player rotation. I would describe this competition as a long sprint. It’s been great work from the league and clubs to get everyone back on the field.”