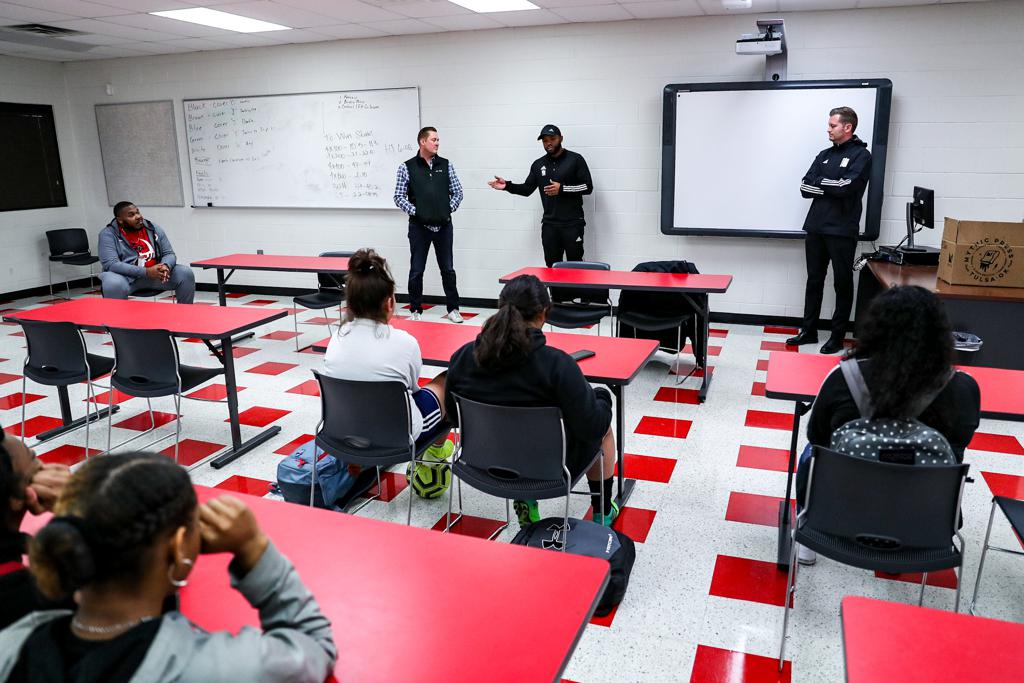 For the first time in a long time, Tulsa Central High School has fielded a girls' soccer team. The revival has been spearheaded by Assistant AD, Nathaniel Goodman, who has brought in a small but passionate group of athletes to lead the first soccer girls' soccer program at TCHS in nearly a decade.

Goodman, a former football coach, has no prior soccer experience which reflects the makeup of the team. Just two of the girls have ever played soccer before this. The group, from the very top to the bottom, is learning, growing and building something new together.

On Tuesday, FC Tulsa, with Coach Michael Nsien and Owner JW Craft, spoke with the newly formed program and gave them a gift.

“I think one of the most important things for myself is the opportunity to give back to the community, especially a community where I came from,” said Nsien.  “I felt that it was important just to share my story, where I come from and what the sport has done for me. I have been able to see parts of the world that I had never dreamed of, I got a college education. I was just hoping I could inspire and trigger one of the girls that play there that there is an opportunity for them to experience and see more out of life.”

The girls’ team has been eager to learn more about this sport and how to play at a higher level and wanted to sit in on a training session with the first team.

“They mentioned that they wanted to come out and see training and I thought that was fantastic,” said Nsien, “Maybe they come here and see the intensity that we play at and they are encouraged and motivated and maybe give the players an opportunity to share their stories. We have players from all over the world. It’s a very unique group of players that we have here and it would be interesting for anyone to come and speak with them about how they ended up in Tulsa, Oklahoma.”

To reward the team for all of their hard work and perseverance to build something from the ground up, Nsien and Craft gave every player on the team FC Tulsa merchandise and tickets to the home opener next week.