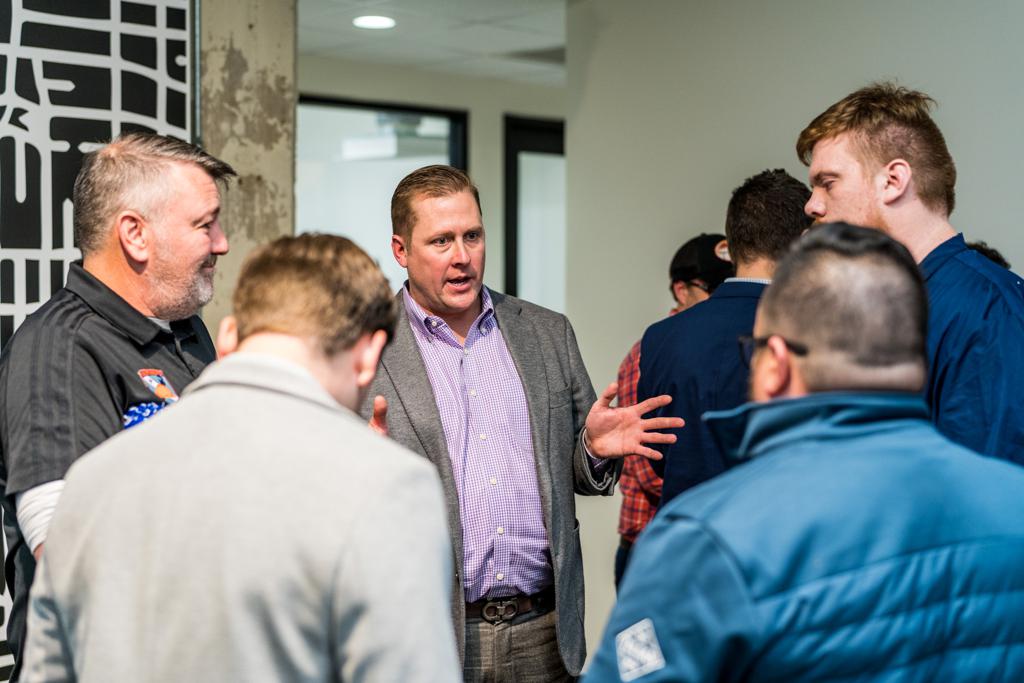 TULSA – Before a sleek, new golden crest made airwaves on Twitter or the name FC Tulsa generated media buzz throughout T-Town, owner J.W. Craft, President James Cannon and numerous members of the front office staff held a town hall with supporters, fans, partners and stakeholders from around Tulsa.

While many saw FC Tulsa for the first time on computer and phone screens around the country on Wednesday morning, a smaller, much more intimate unveiling happened the night before in the heart of the Brady Arts District. In a small gathering spot in front of about 80 people, the FC Tulsa brand was debuted to Tulsa soccer fans. The club wanted its fans and stakeholders to see it first before the rest of the soccer world.

“We will be a fan-friendly and fan-first organization in everything that we do,” said Cannon. “That meant that our fans should be the first ones to see what the future of our club looks like. We asked for their trust and confidence in maintaining the surprise for everyone else, and they held up their end of the bargain.”

Going into the meeting, those invited to the event didn’t know who or what would be talked about, only that Craft, Cannon and other would address the future of pro soccer in Tulsa. Fans quickly became excited, however, as it was apparent that they were in for a treat.

“We got an introduction of the new staff and management,” said John Martin, a Tulsa Roughnecks season ticket holder since 1978. “I got to meet James [Cannon] and other members of the staff. It was maybe even more than I expected. Then they gave us a pre announcement, letting us know about the FC Tulsa name change and new logo. I certainly didn’t expect that. That was above and beyond.”

Attendees even had the opportunity to ask questions prior to the event that could be answered in the town hall. Everything from $1 hot dogs at matches to signing Zlatan Ibrahimovic this offseason was on the board as Cannon answered the questions from the fans.

“Meetings like this are important to us because fans are the lifeblood of the club they support,” said Cannon. “Our fans are investing in this team because they truly believe in what we are building. We owe it to them to be available to listen.”

This town hall meeting won’t be the last for FC Tulsa as it continues to make the Tulsa community a primary focal point throughout the offseason and into 2020. Part of that commitment from the club was to also announce fan-friendly season ticket pricing for next season starting at just $8 a match. Fans can now sign up and be contacted with details by an FC Tulsa staff member by clicking here.