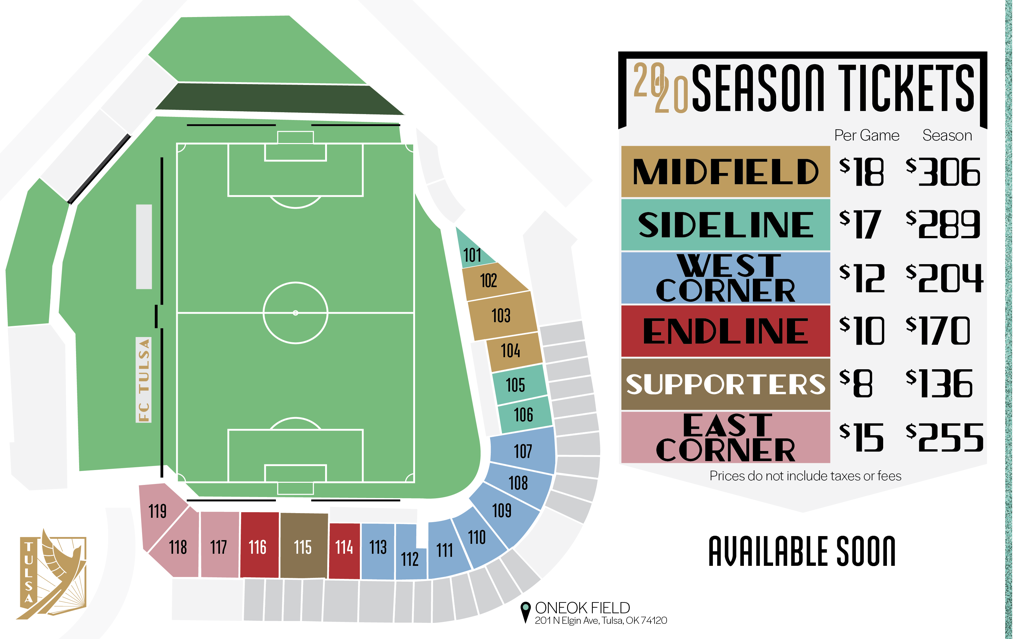 Tickets start at just $8 a match

TULSA – As FC Tulsa kicks off its new era as Tulsa’s soccer club, it wants all of Tulsa to experience the beautiful game.

With the club’s updated name, crest and colors, FC Tulsa launched it’s fan-friendly 2020 season ticket pricing starting at just $8 per match for the USL Championship season, making FC Tulsa matches an available entertainment option for anyone who wants to take in a match.

“Our matches should be accessible and affordable to all of Tulsa,” said FC Tulsa President James Cannon. “We are committed to put an exciting and winning team on the field in 2020 with a significant increase in player investment and the gameday experience for our fans. It’s going to be a show for good value, and we want all of Tulsa to attend.”

With seats directly behind the goal, the Supporters Section will have the loudest influence on any FC Tulsa match. Whether it’s rattling the opposing keeper or encouraging the home one, the supporters will have some of the closest seats to the field. Fans in this section will stand for all 90 minutes of action and will be allowed to bring in drums and flags to help set the atmosphere to make ONEOK Field a fortress for FC Tulsa.

On either side of the Supporters Section, fans on the Endline will have an up-close and personal view of the rowdy supporters. The atmosphere generated by the supporters will bleed over into these sections as fans learn the chants and cheers created from the supporters groups. Endline fans will be among the closest to the field.

Around the west corner of the pitch sits some of the best ‘bang for your buck’ seats in the stadium. Not only will fans in this section get a nice, full view of the action, but they get to choose whether to sit closer to the supporters, or around the corner to view the bench side of the pitch.

The East Corner seats will be well within earshot of the Supporters Sections while also being close to the massive Scoreboard Bar out in left field. It won’t take but a few minutes to leave your seat and grab a drink while missing none of the action at FC Tulsa matches.

Want to be along the sideline but not pay as much to have midfield seats? Then this is the spot for you. Get a great look at players and coaches on the benches while seeing the back-and-forth soccer on both ends of the pitch. These seats will also be in the shade in the afternoon as the sun sets behind.

Situated in the middle of the field and directly across from the benches, these are the best seats in the house in ONEOK Field’s lower bowl. Fans will get fantastic views of all the action on both ends of the pitch with direct views of both goals. Like the sideline seats, these seats will also be in the shade in the afternoon as the sun sets behind.